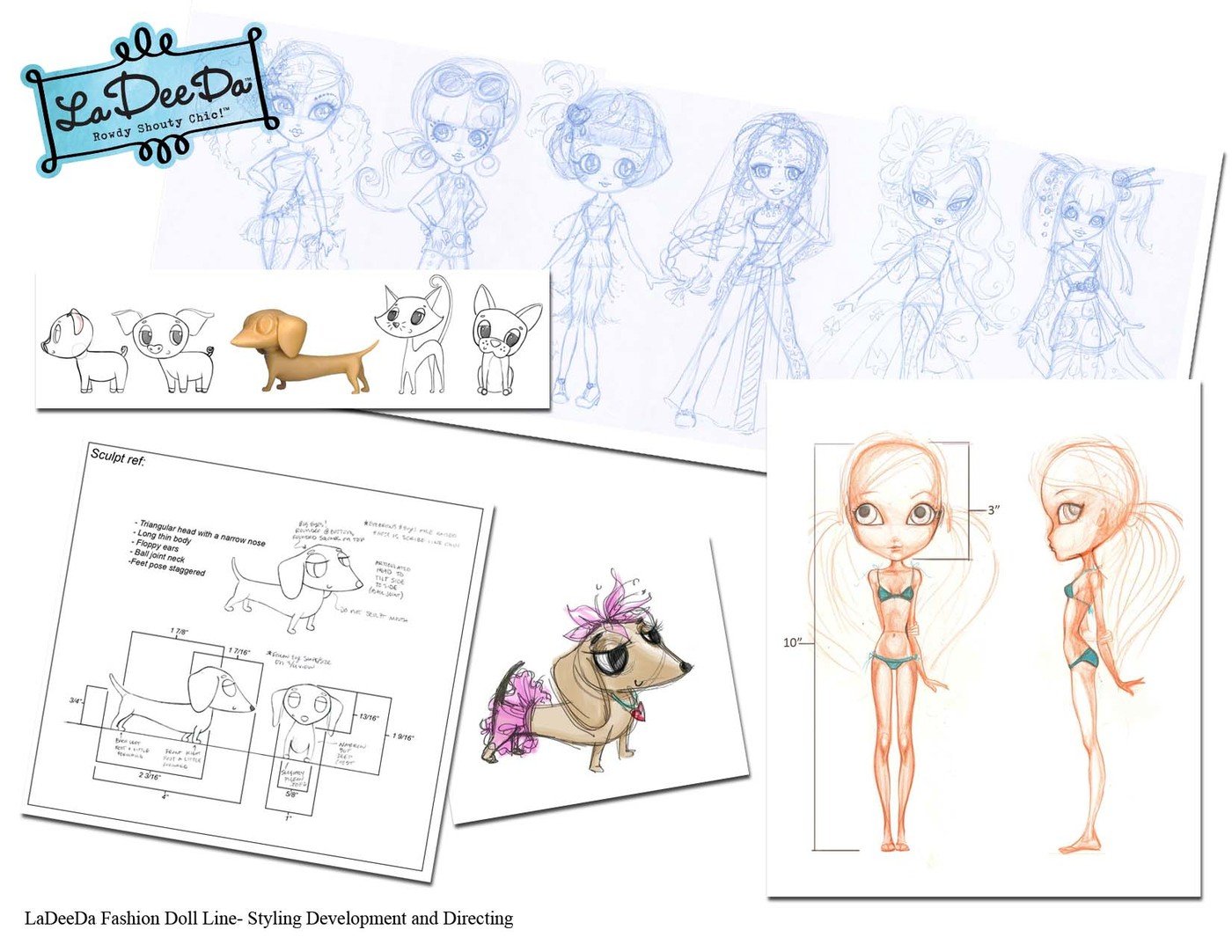 Directed Character Design and sculpting for LaDeeDa Dolls working with freelancers to come up with the look of the doll. The dolls final design shown at bottom right, was a photoshop combination I did of the drawings by one artist.

I designed the pet friend characters to coincide within the world. LeBun the dog was the only one released into production. 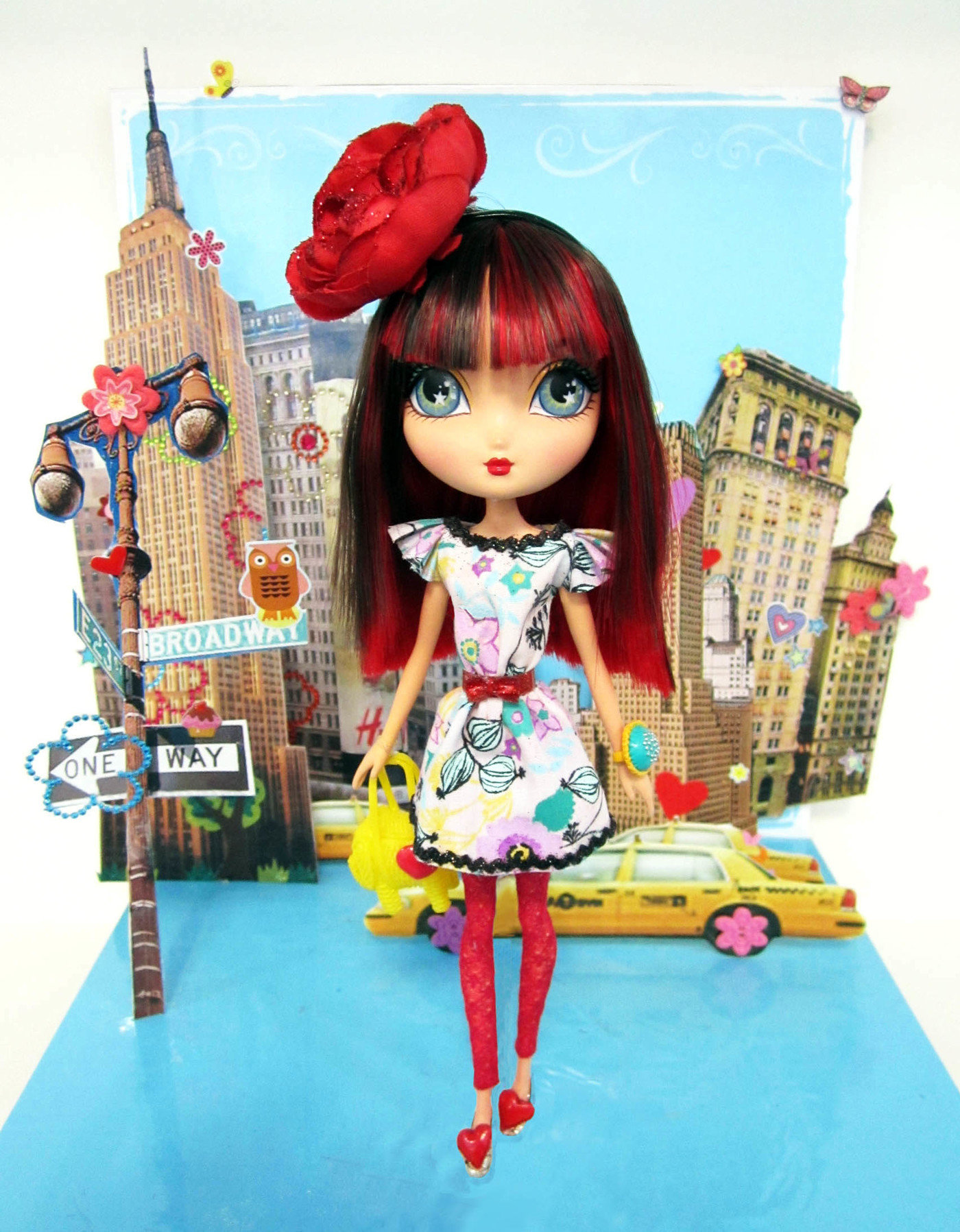 LaDeeDa- Dee
Here is the original "city girl" design I did which was later changed to a different dress in production.
Designed and directed all aspects for prototype on first version shown here.

Dee's personal style is at times eclectic and always inspired by things she loves. Her funky style is reflected by her enormous flower on her head, oversized heart shoes, vintage inspired dress and quirky elephant purse. She originally had a pin cushion bracelet to always keep her sewing accessories handy when she got inspired to create a new look!

This was a really great line to work on and very inspiring. 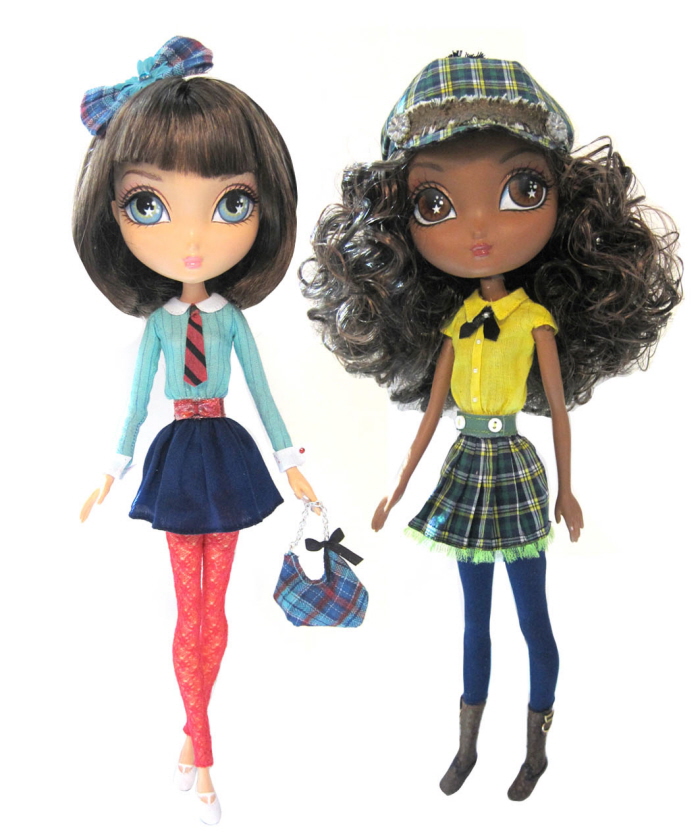 Prototype Dee and Best friend in their everyday "school girl" uniforms. Students by day, fashion designers after the bell rings!
Outfits were inspired by the popular "Gossip Girls" of the time. 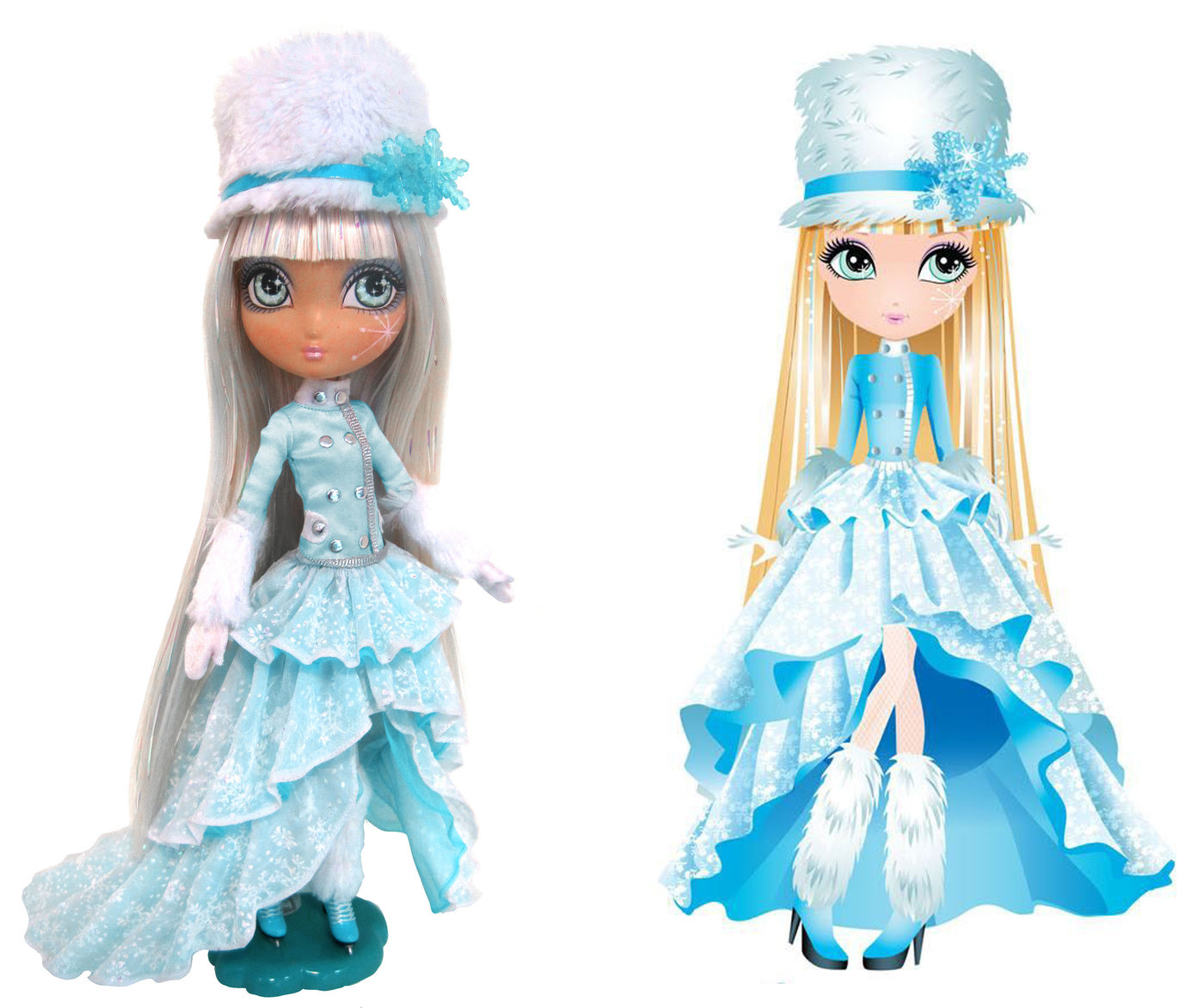 She was never released as a doll but the design found its way online as a digital surprise after one of the games you play on the LaDeeDa website.

So where would you wear such an elaborate and fancy gown? Ice skating of course! Dee made a special outfit for an outdoor ice skating adventure in New York! I wish I was that bold! If she was real maybe she would be BFF's with Daphne Guinness! ;D I love her style! 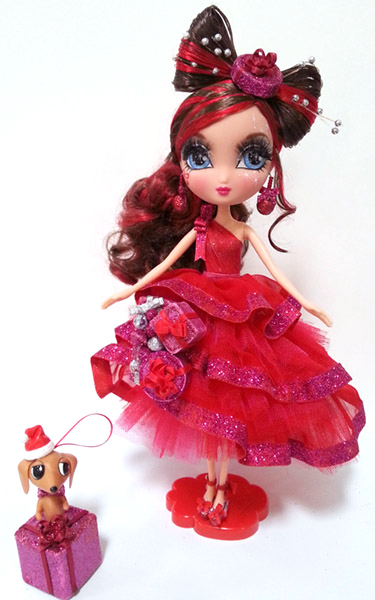 LaDeeDa- Dee Holiday Doll
Inspired by the art of wrapping during the holidays, Dee decided to wrap herself like a glamorous couture present! Special Le Bun ornament included.
(Never released) 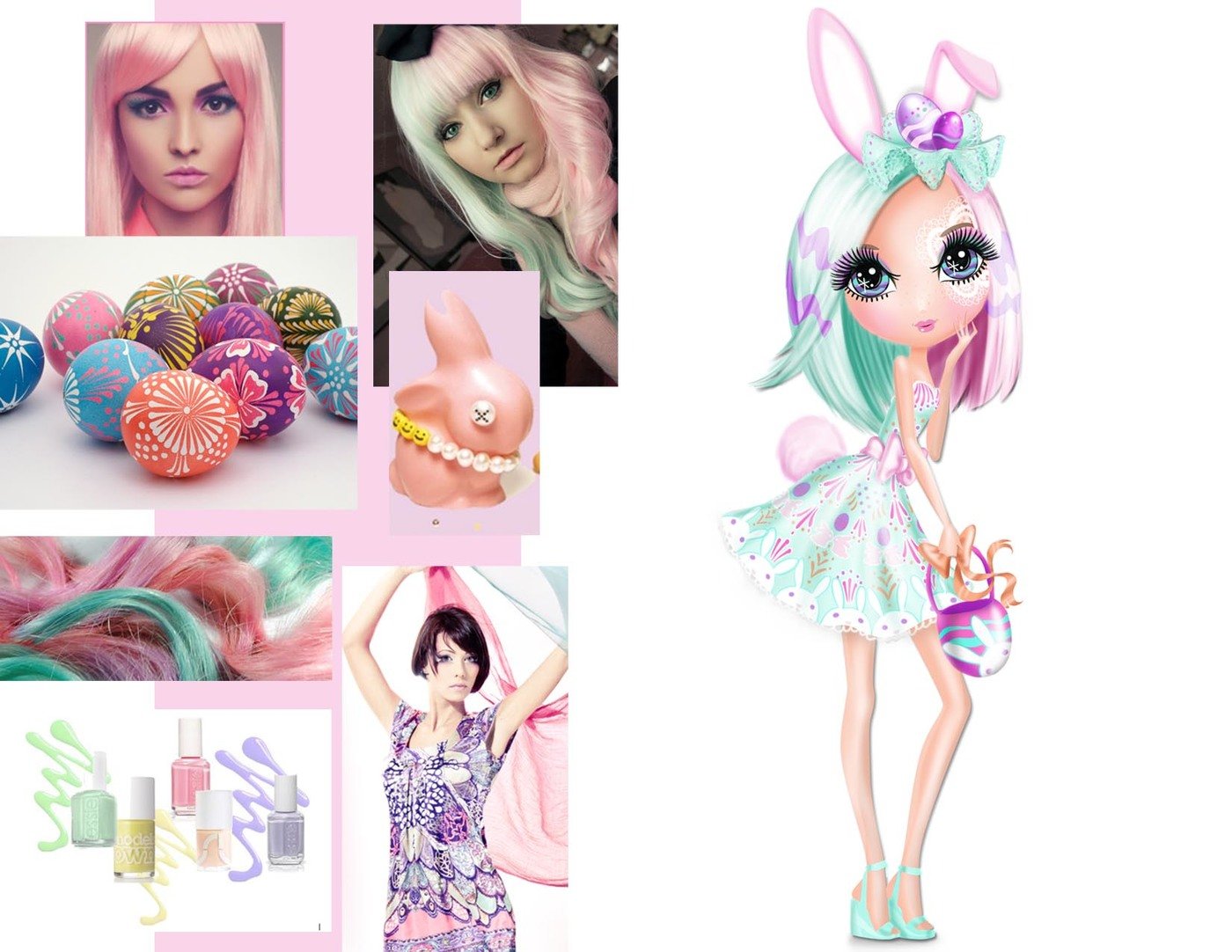 La Dee Da- Easter Dee
Inspiration and Design for a never released Easter Doll.
I loved working with the pastels and graphic prints to create this, two-toned hair, glamour girl! 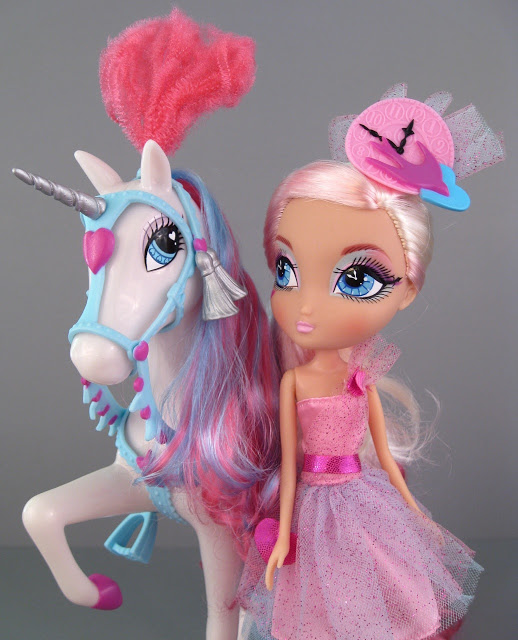 La Dee Da- Dee as Cinderella
A different take on the girl everyone knows. Cinderella is wearing a tulle dress layered in pastel pink and blue giving it a two-toned look and carries her heart on her sleeve as she races to get home after her clock fascinator is about to chime midnight! Details of clocks in her eyes make this a unique face deco and her trusty steed becomes a unicorn with a removable horn to add additional fantasy to the story.
Working with our China factory I developed this specific pastel pink hair that was only used on two dolls in this line. 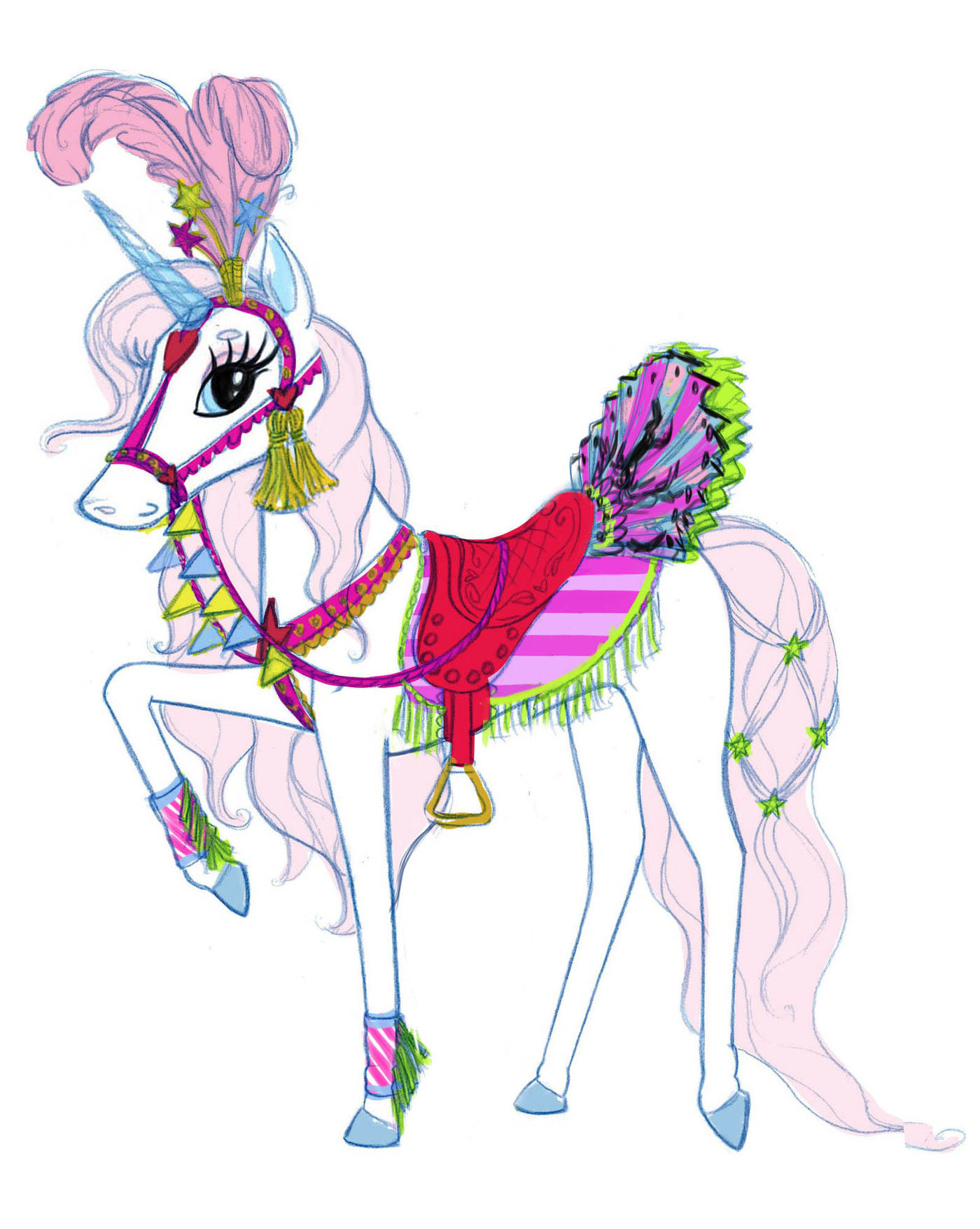 Concept sketch for the LaDeeDa Horse in a Circus theme

I wanted the horse to look like it was from the same cartoony world as the dolls, so it had oversized glamourous eyes, simplified features and a thin, long, leggy body.
The simple side smirk mouth was signature to LeBun as well. 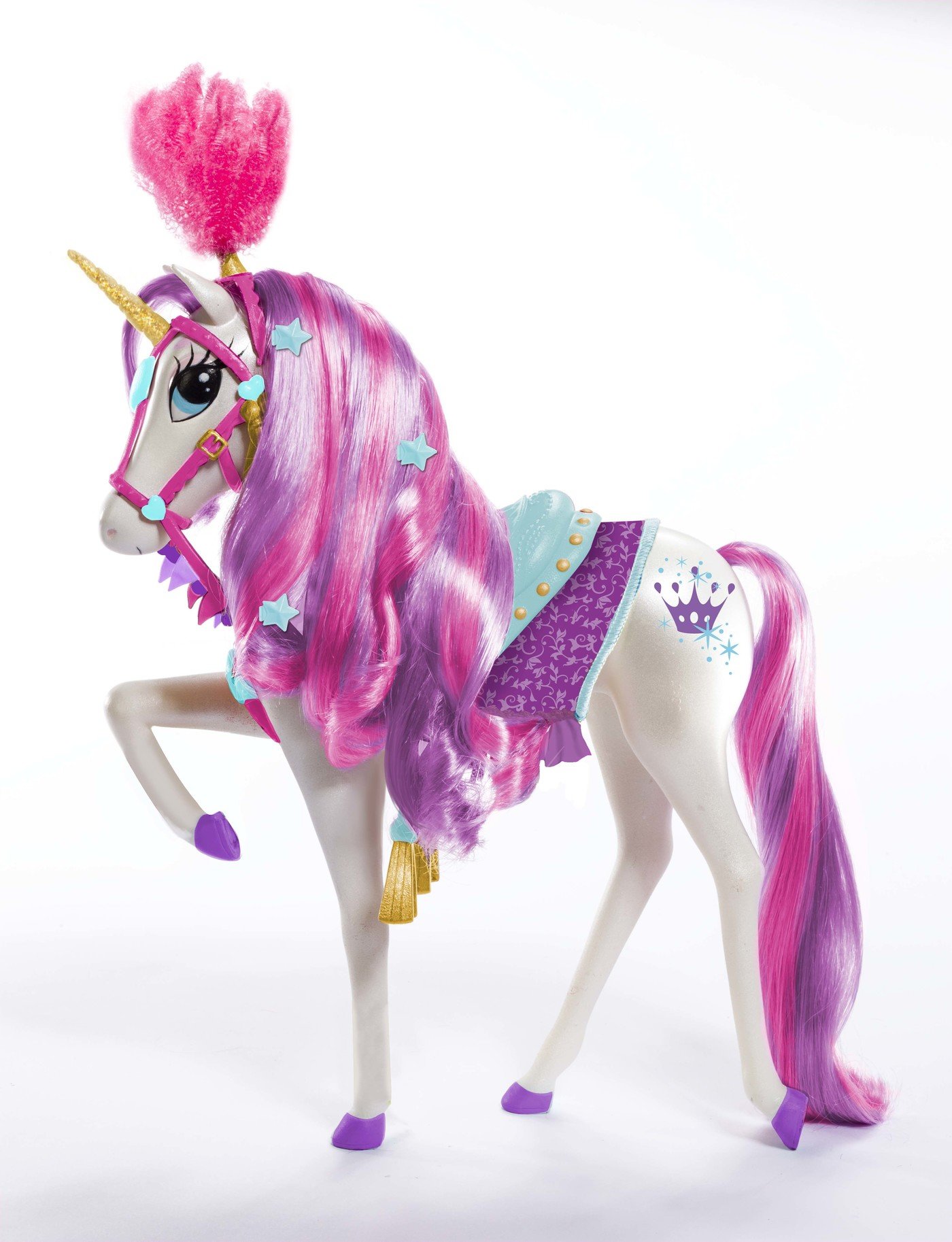 La Dee Da- Circus Horse
Final production horse had hoof stickers to decorate her "nails" and a craft for the child to create a tutu skirt for the horse.
All tack removable as well as the optional "Unicorn Horn" 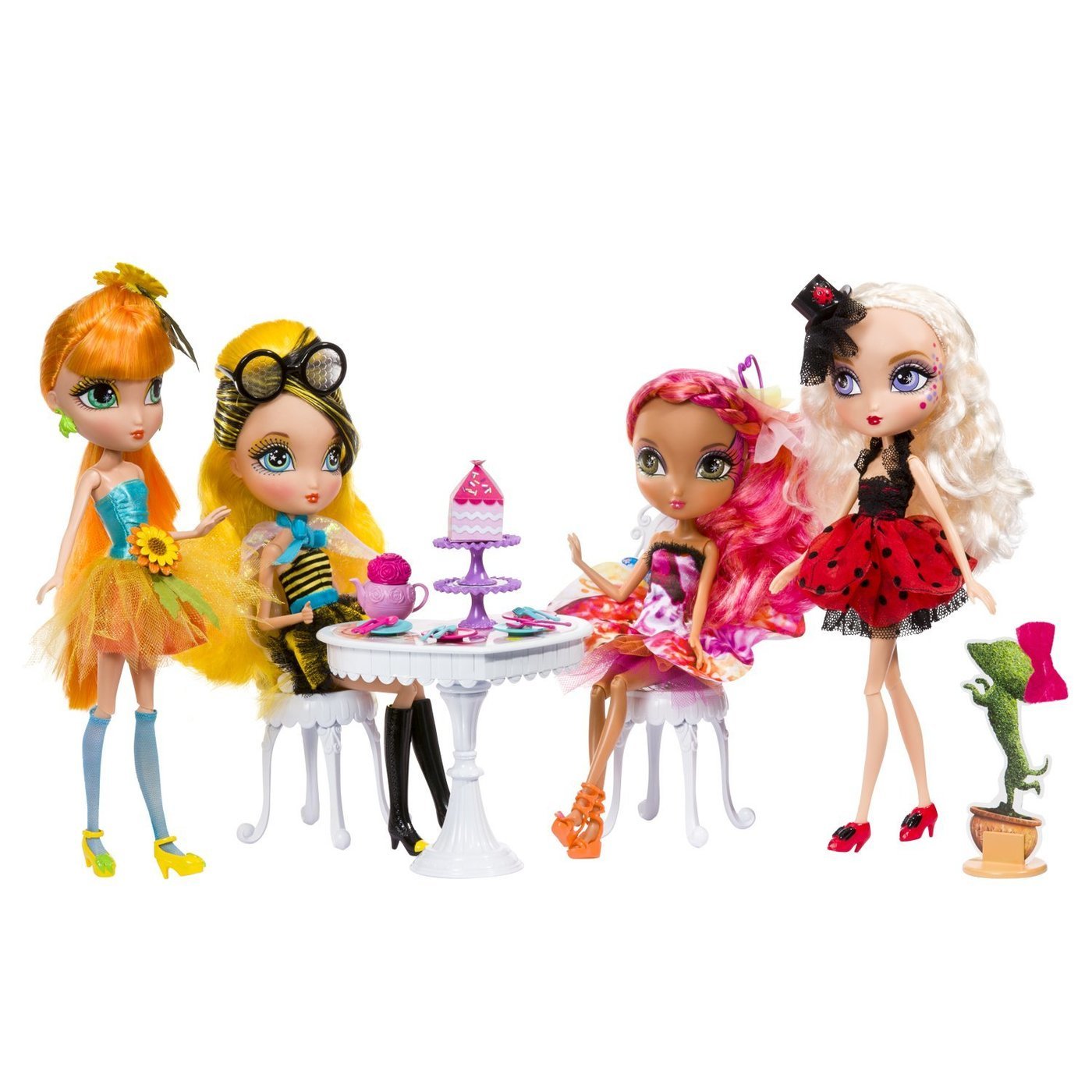 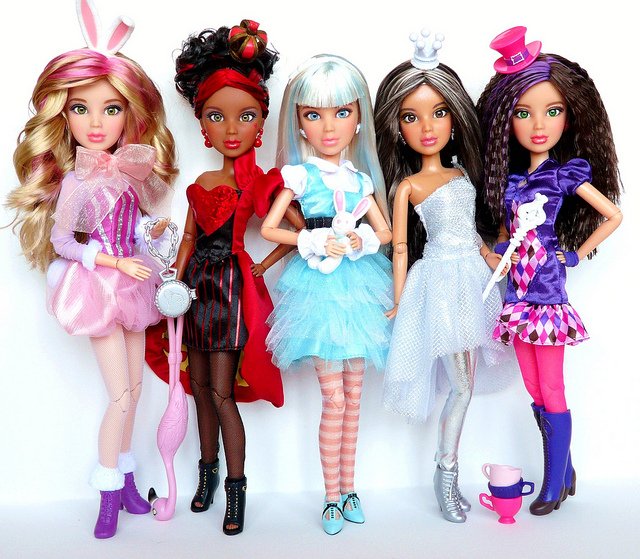 LIV- Alice in Wonderland themed school play
Such a fun theme to design to! This was definitely one of my favorite projects in this line!
Fashion designs, hair, deco and accessories from concept to production. 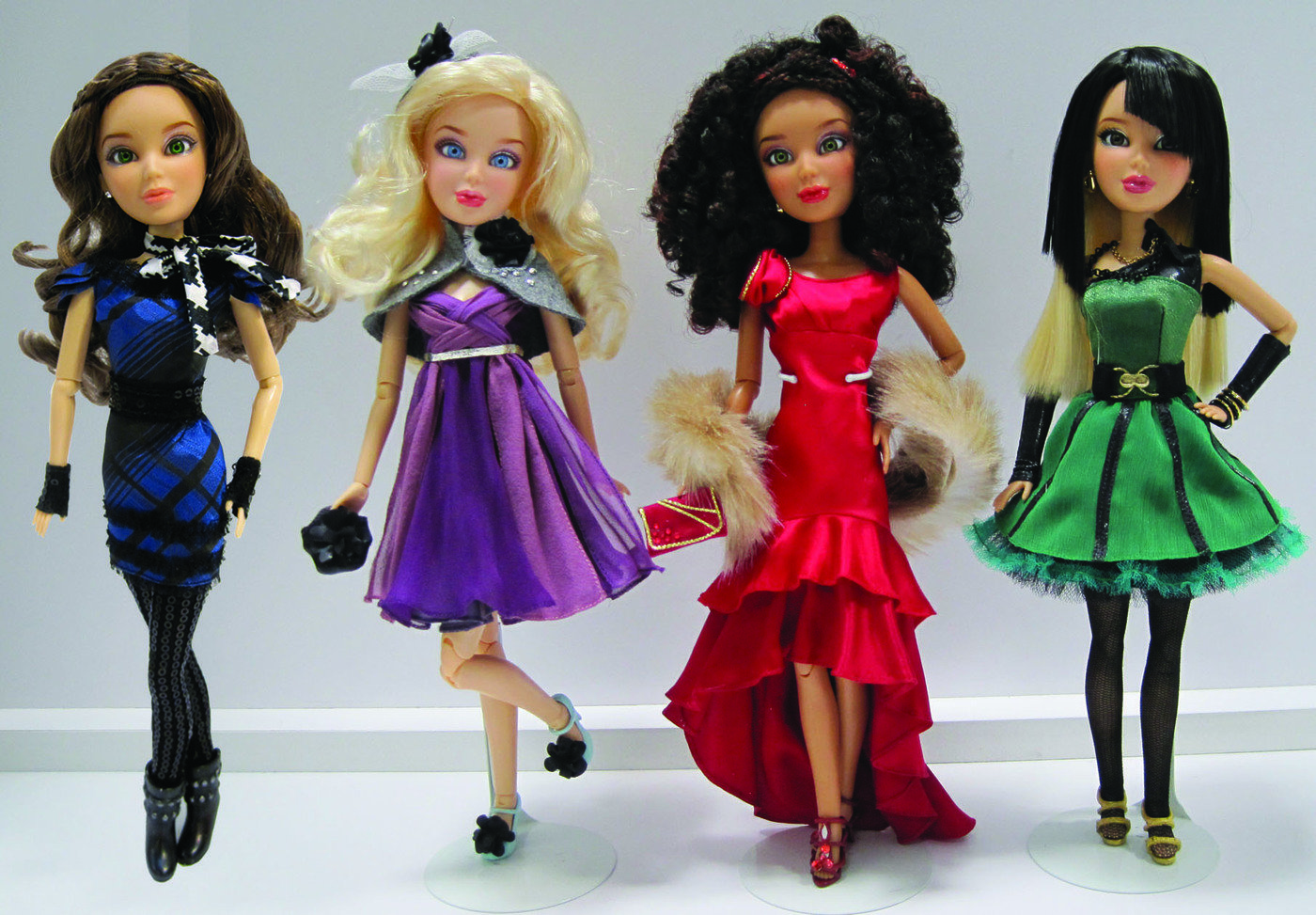 LIV- Winter Formal Dance Theme
These were the prototype dolls in the original version of my designs. Production dolls changed slightly with Sophie's caplet becoming a cropped jacket and Alexis' long dress shortened to a cocktail dress.
Katie wears a sporty plaid fitted dress with sequined leggings and a mens tie tied in a bow. Sophie wears an airy and romantic retro inspired chiffon dress with a pleather flower fascinator and felt caplet. Alexis wears a red carpet ready floor length satin gown with fur stole. I love her curls! Daniela wears an edgy futuristic two-toned "A" line dress in bold emerald green with black iridescent arm cuffs and knee high boots. Her hair is two-toned and layered, black and blonde, with the top layer as an asymmetrical "V" shaped bob and long knee length blonde hair cascading underneath. One of the edgiest wig hairstyles done in the LIV doll line. 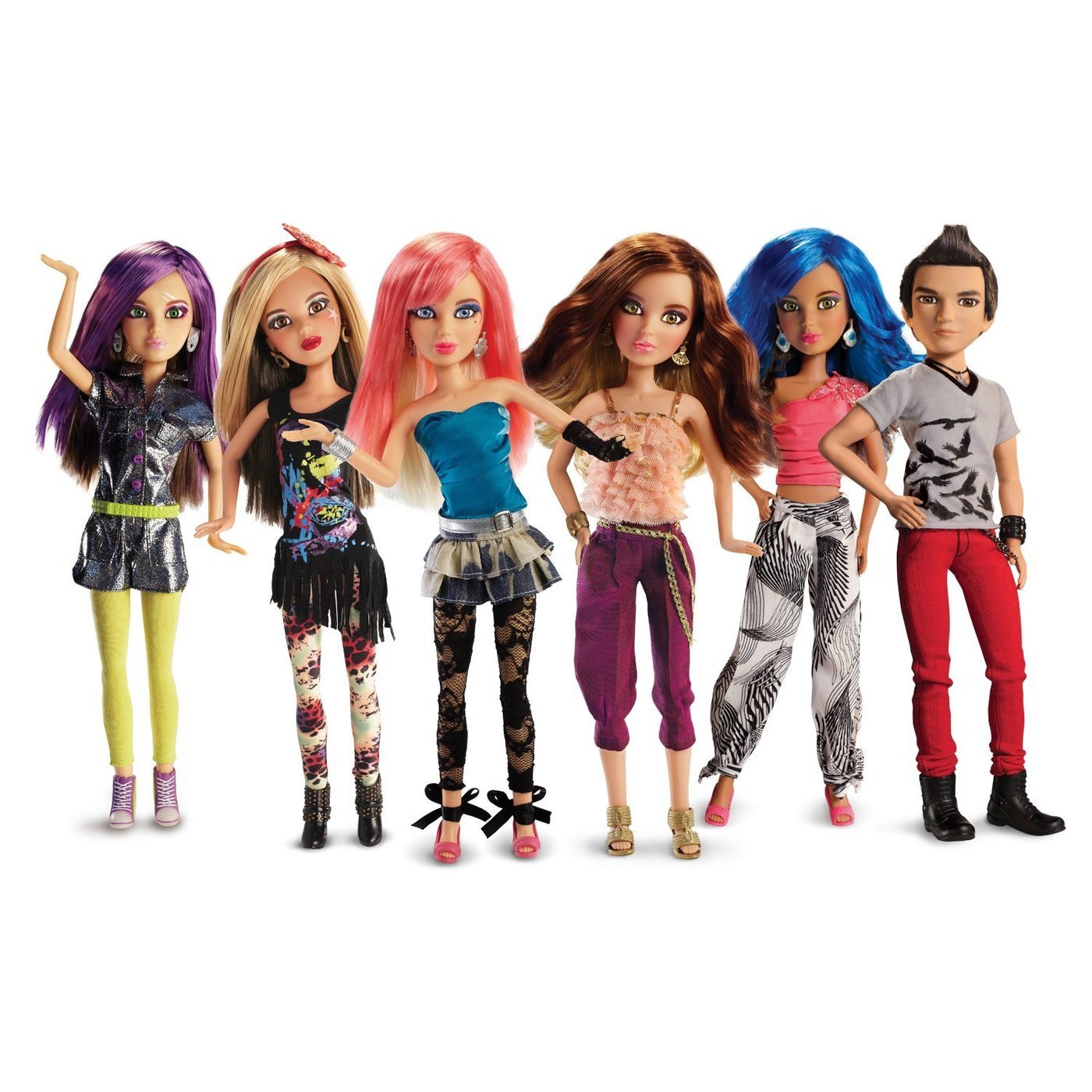 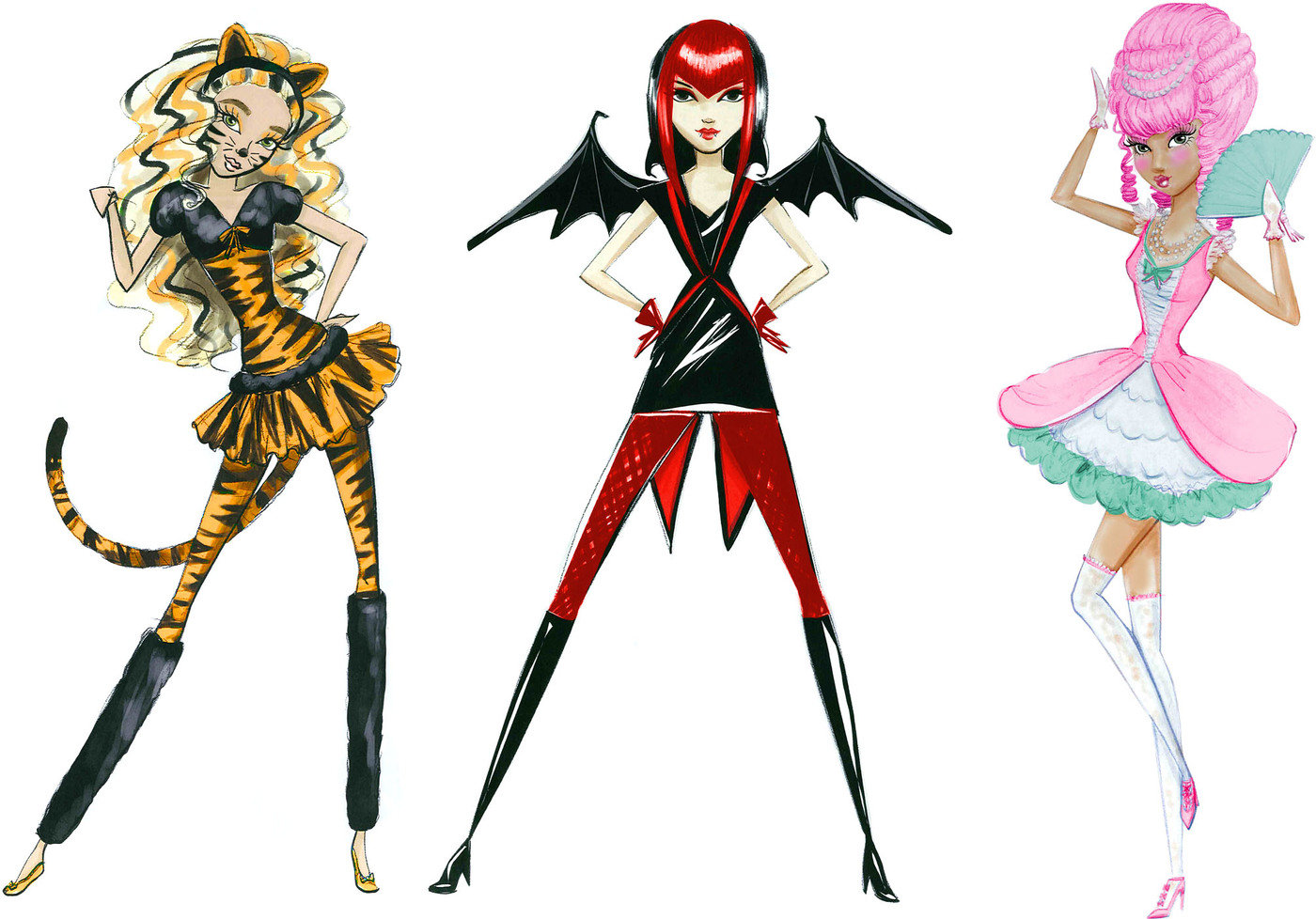 These were teenage inspired costumes. Sweet and a little sassy!
Hayden as a Tiger
Daniela as a Vampire
Alexis as Cotton Candy Marie Antoinette

These all came with uniquely colored and style wigs which was an exclusive feature of the LIV brand. 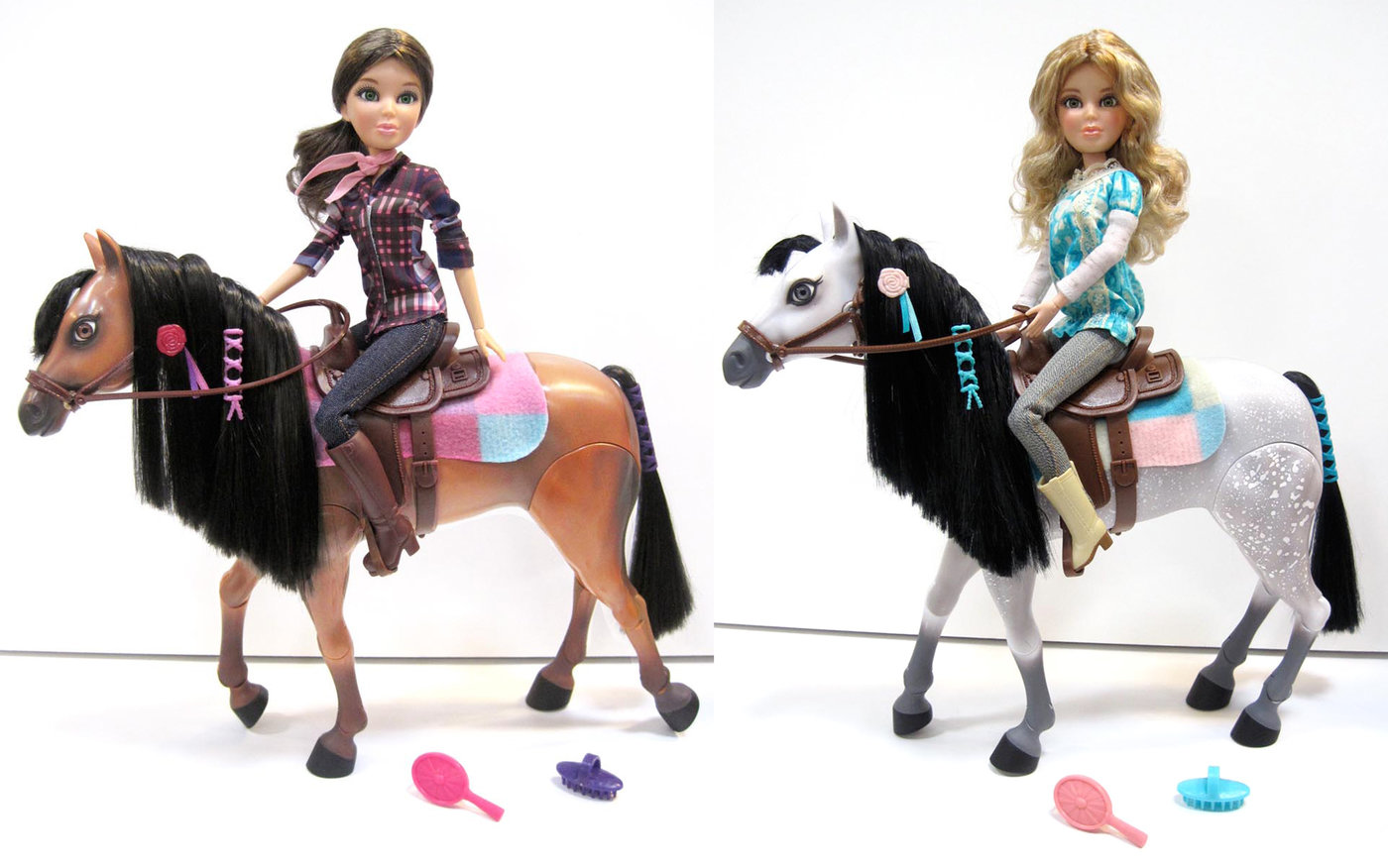 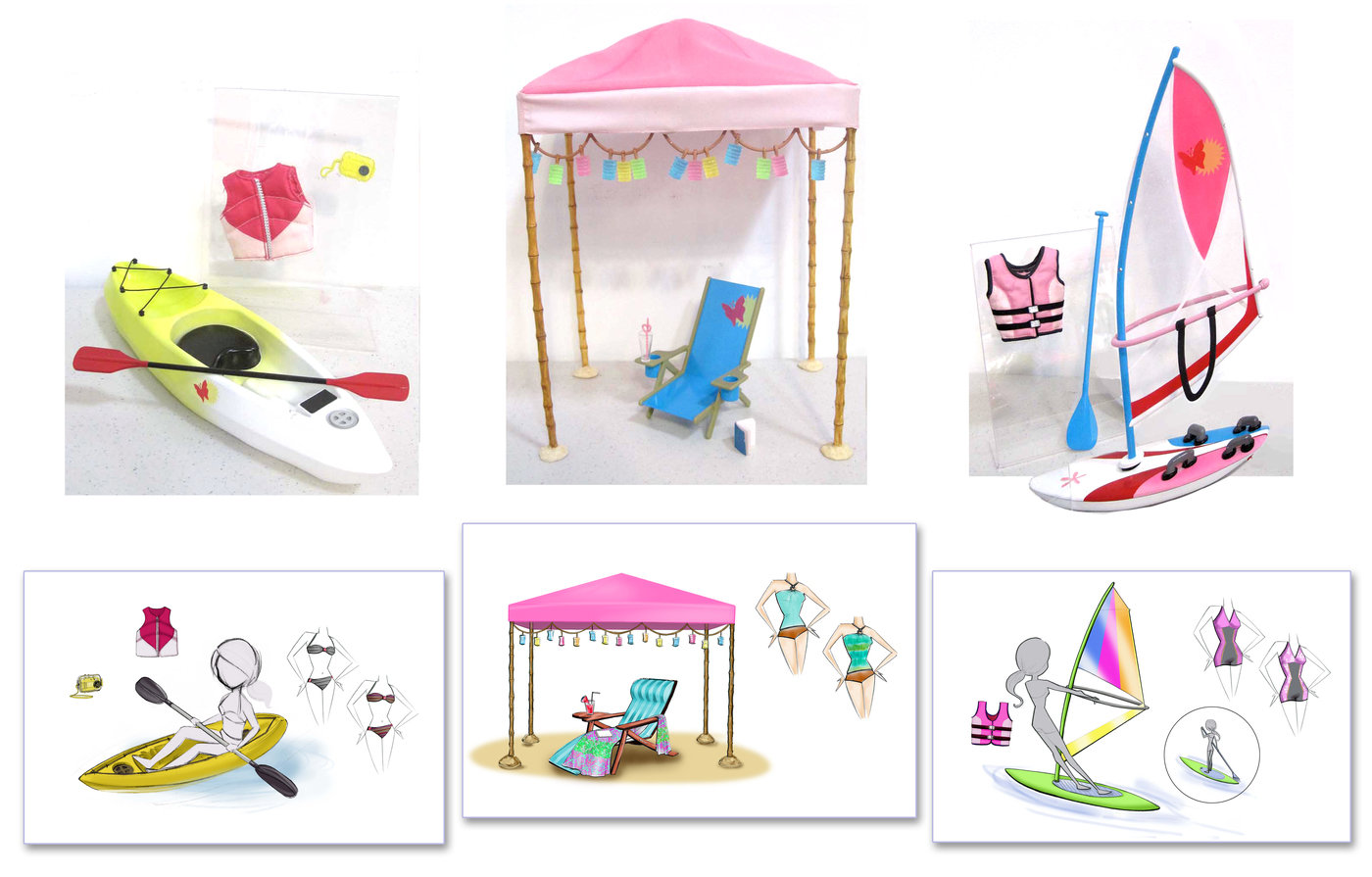 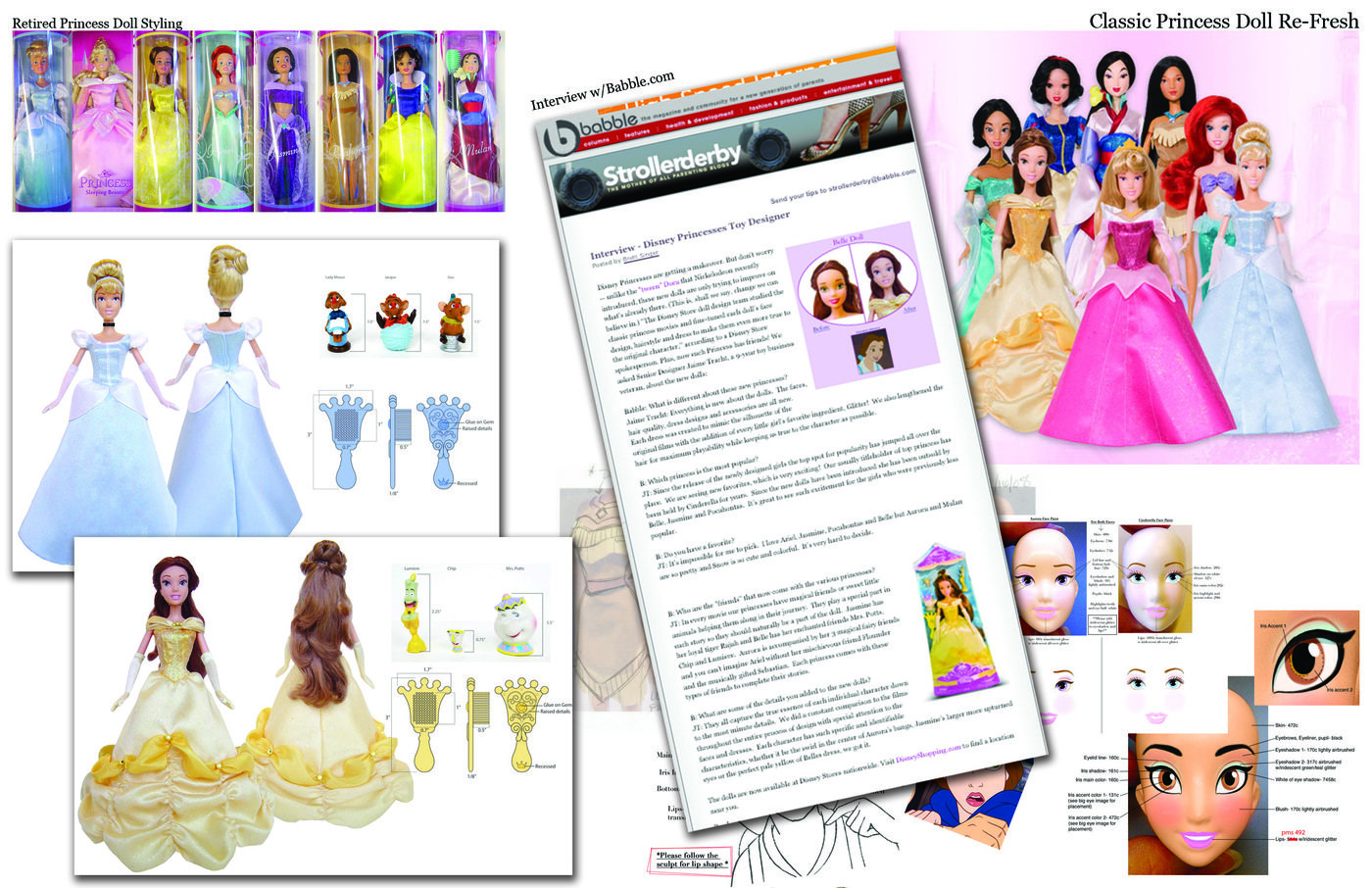 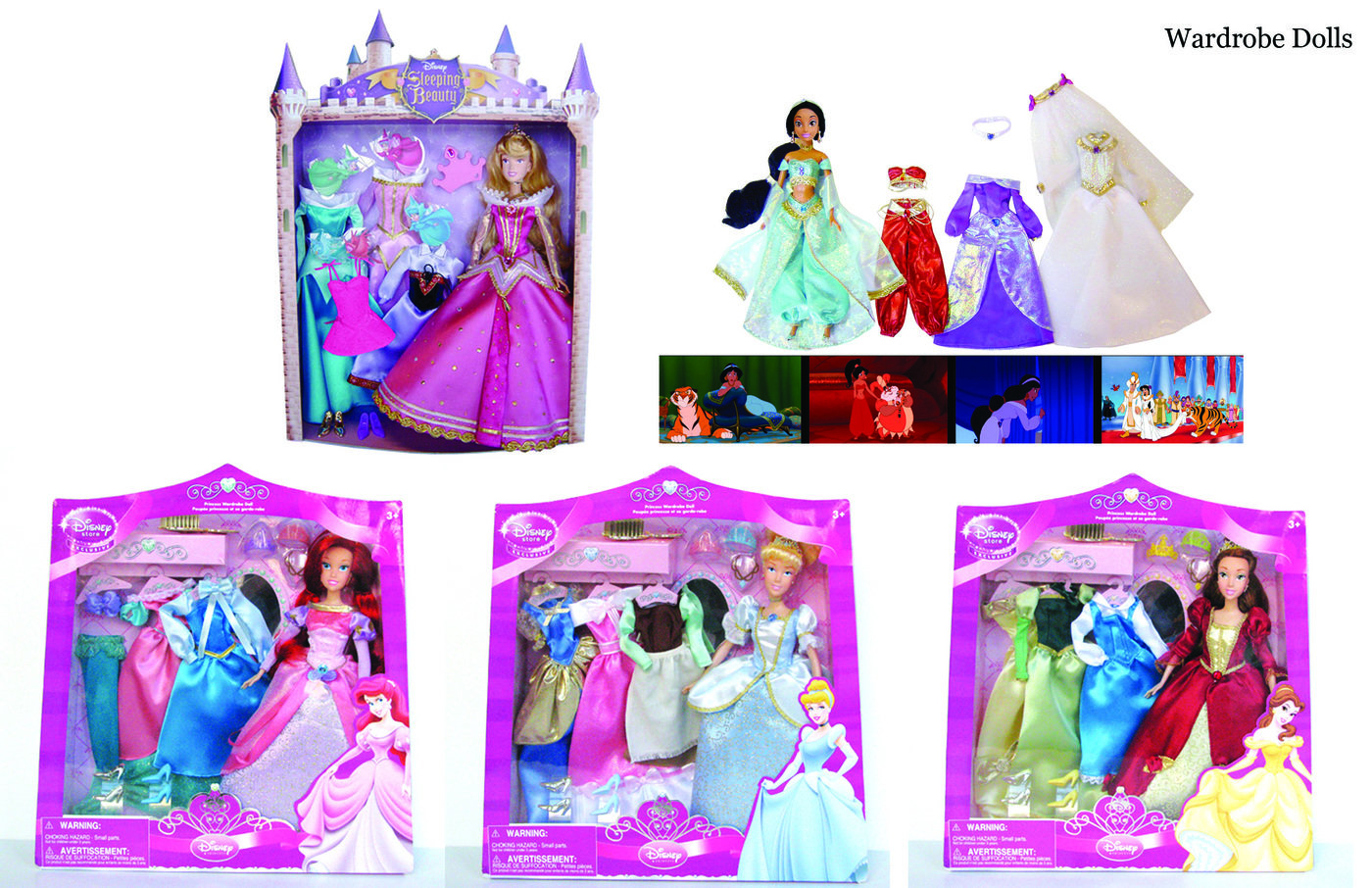 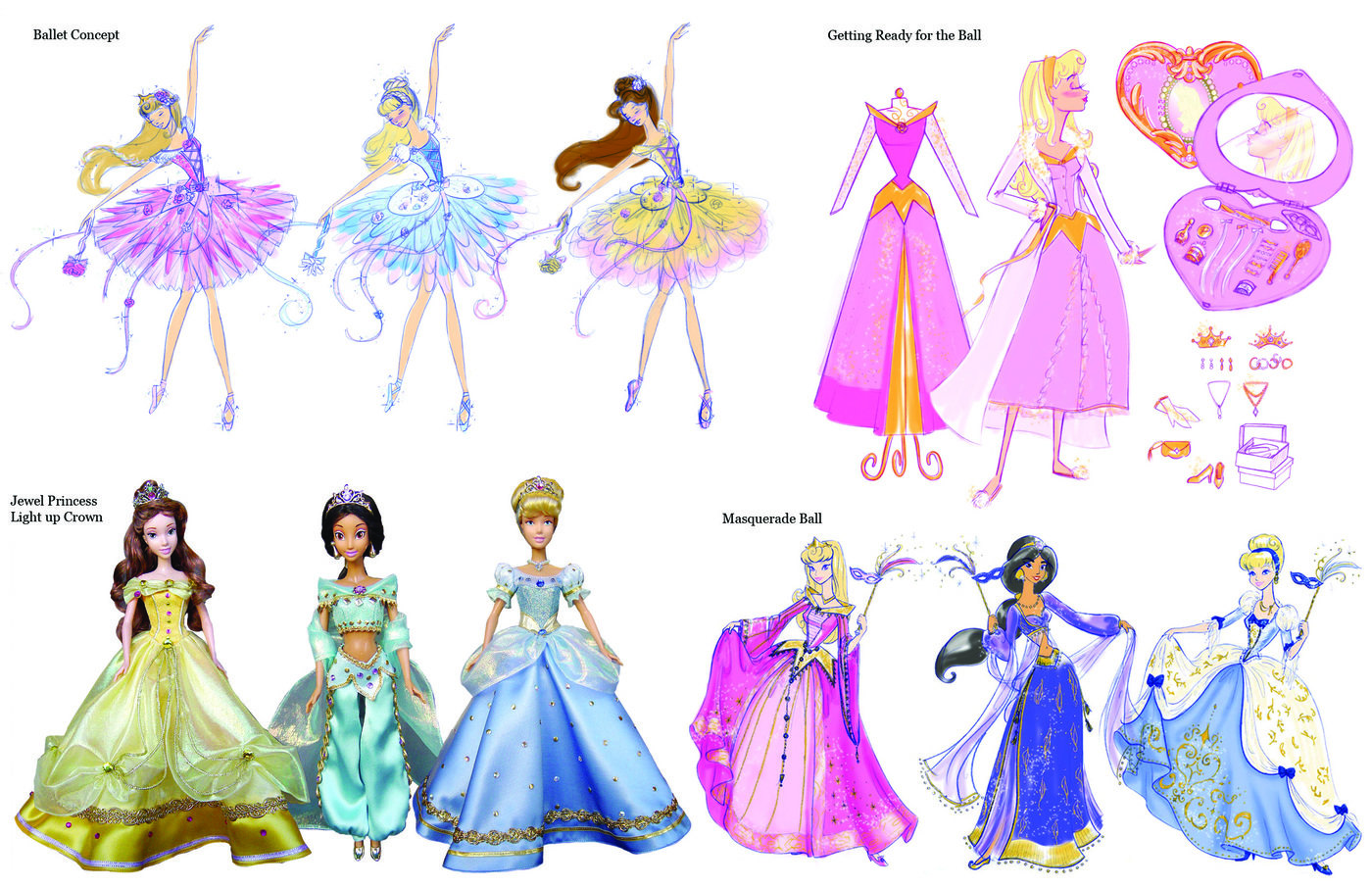 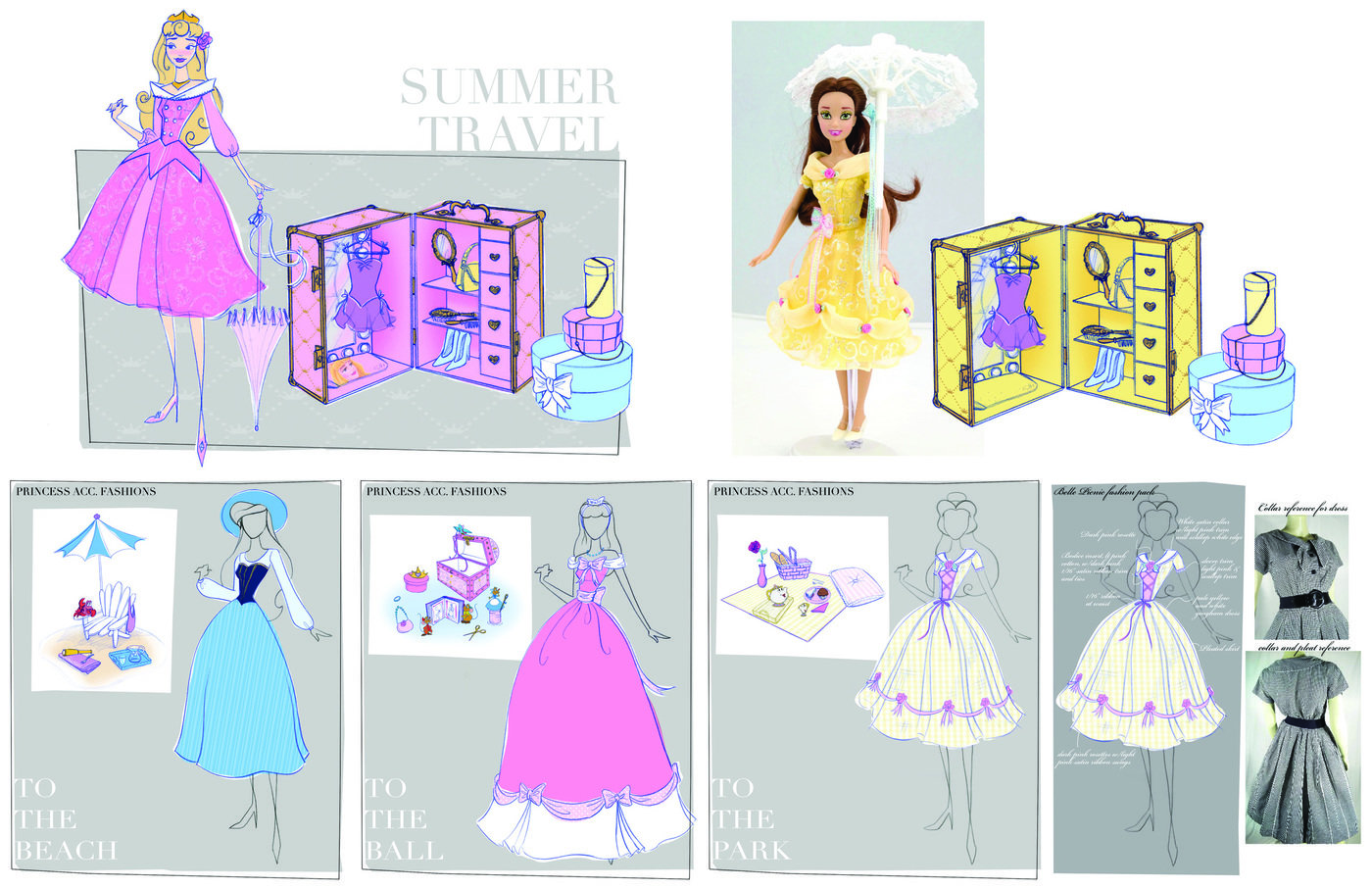 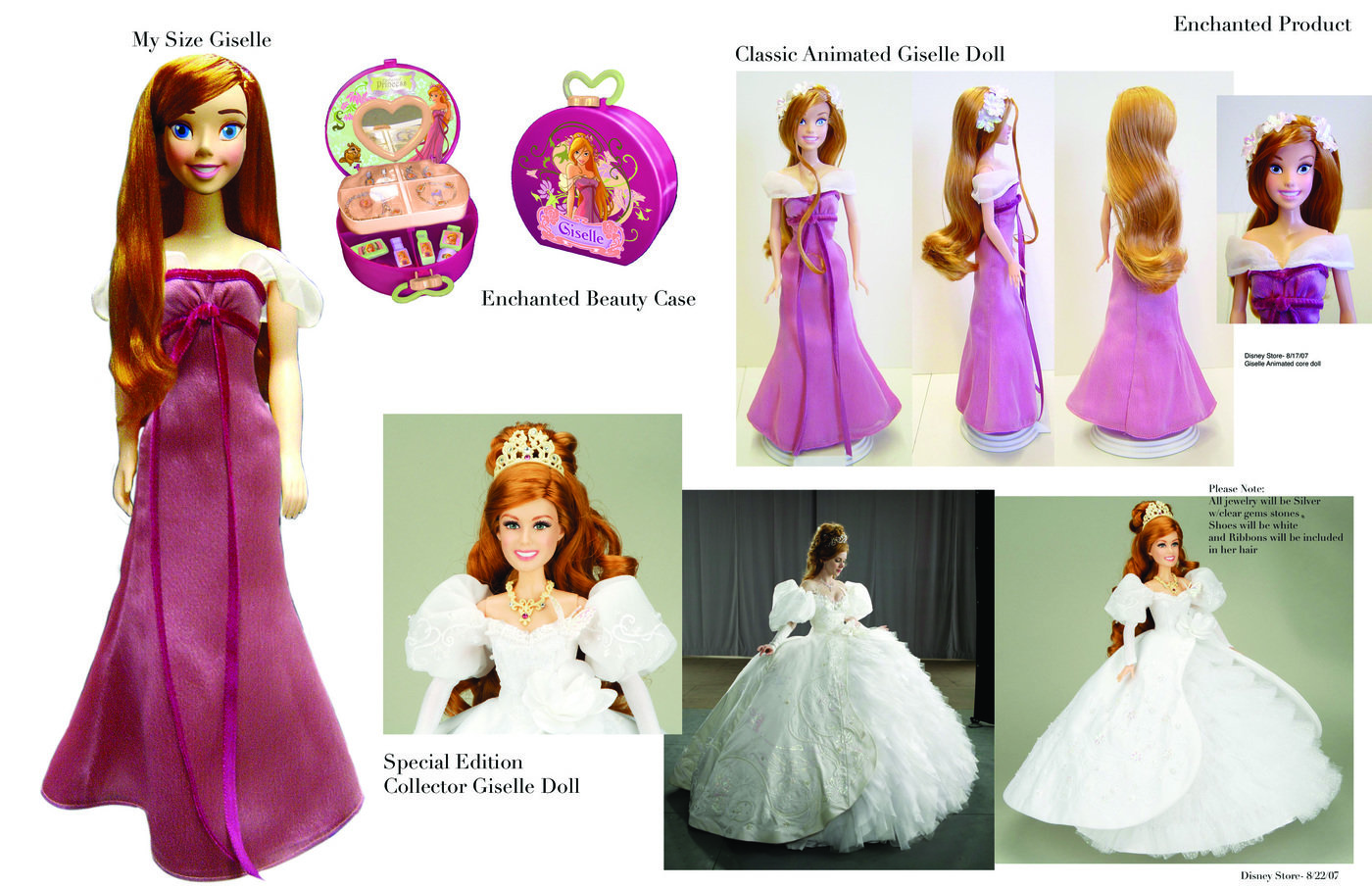 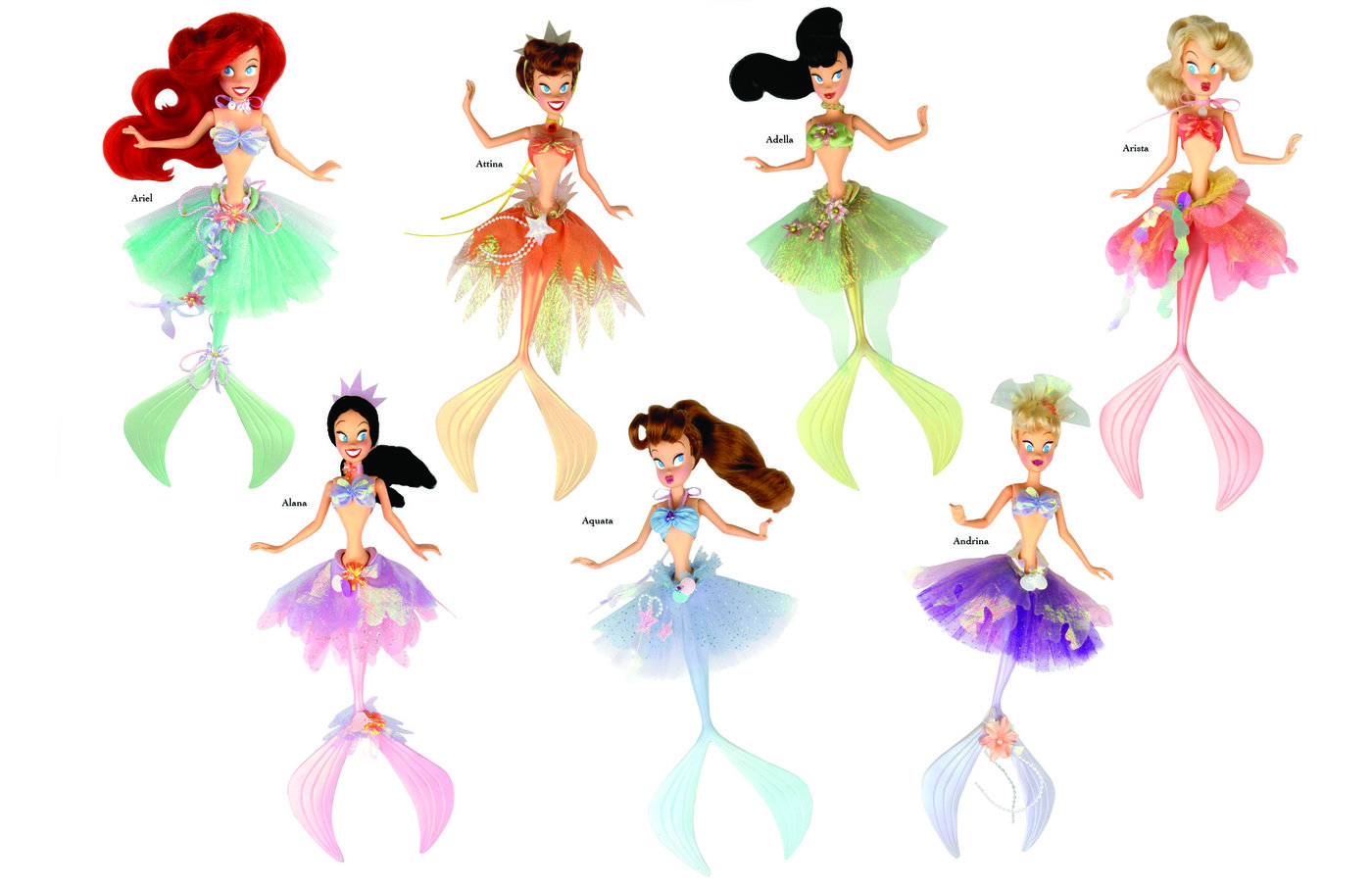 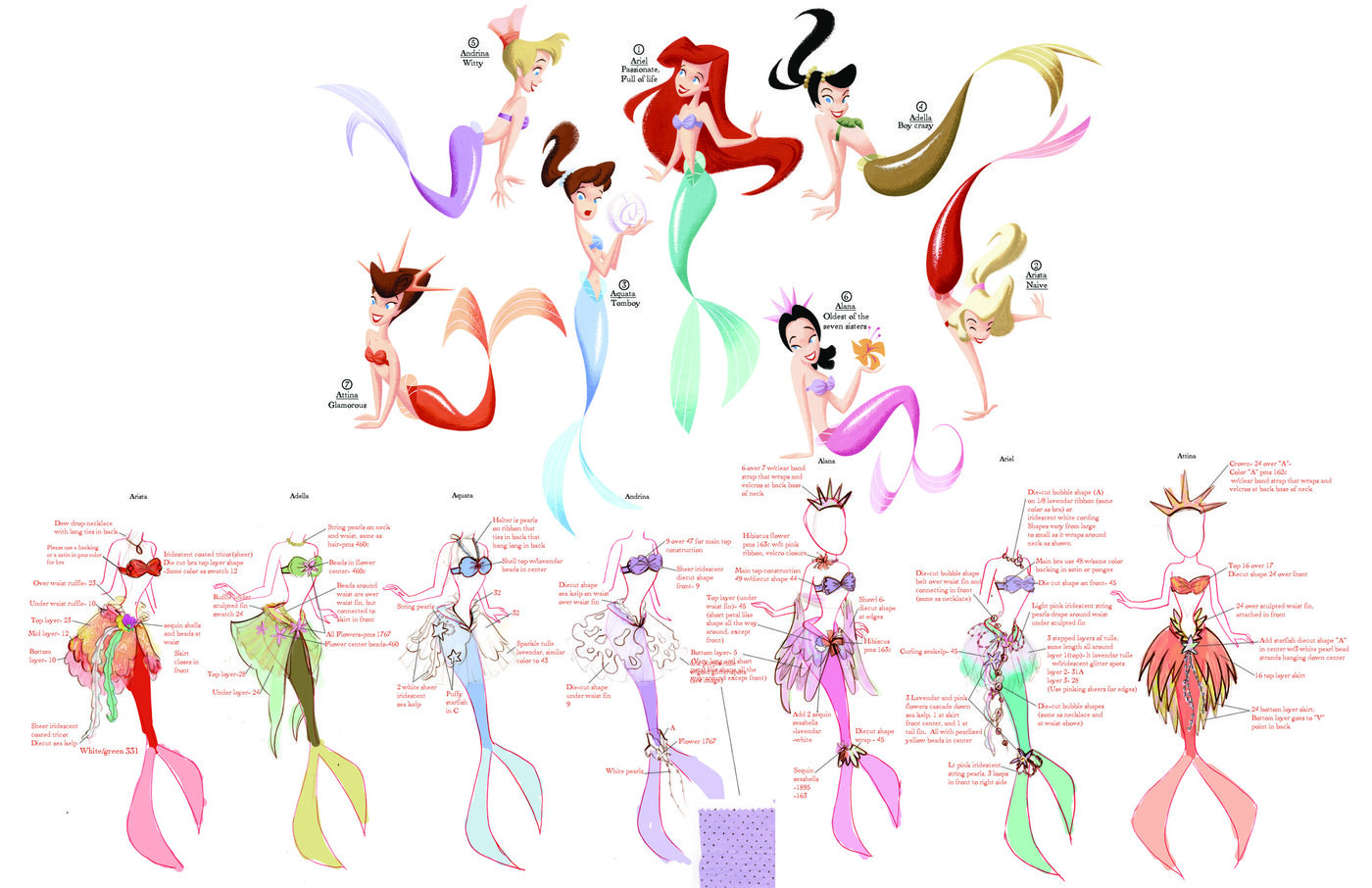 All the mermaid sisters needed fashions designed to make the dolls more playable. I designed each skirt to mimic their design details and personalities. 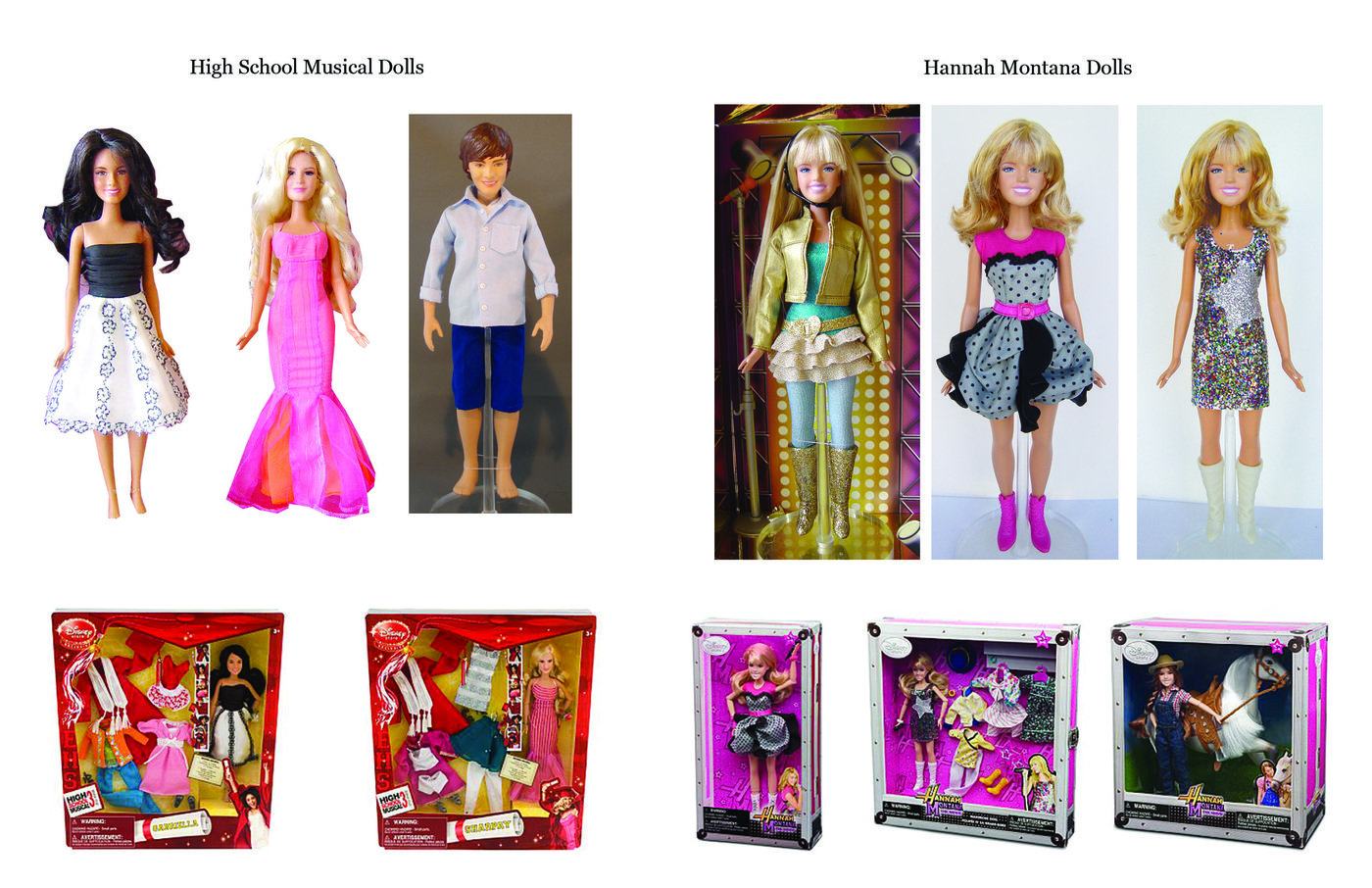 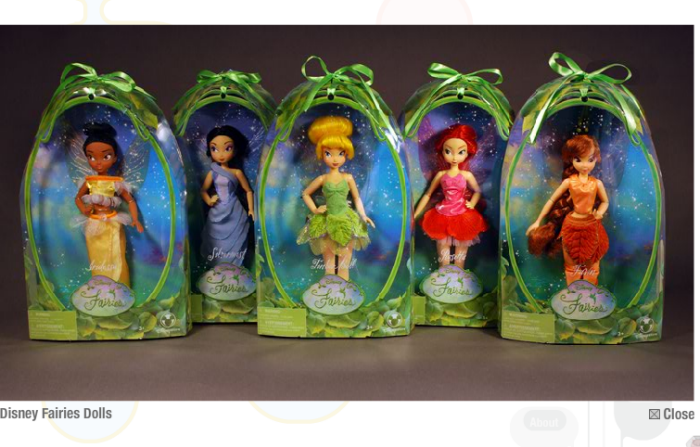 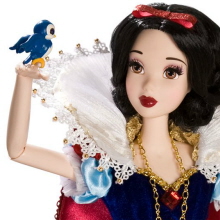 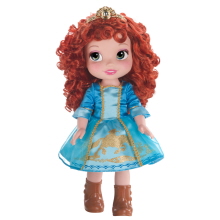 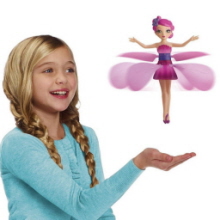 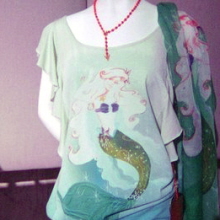