by Neil Ferguson
Dec 14, 2016
Above the Fold Interviews 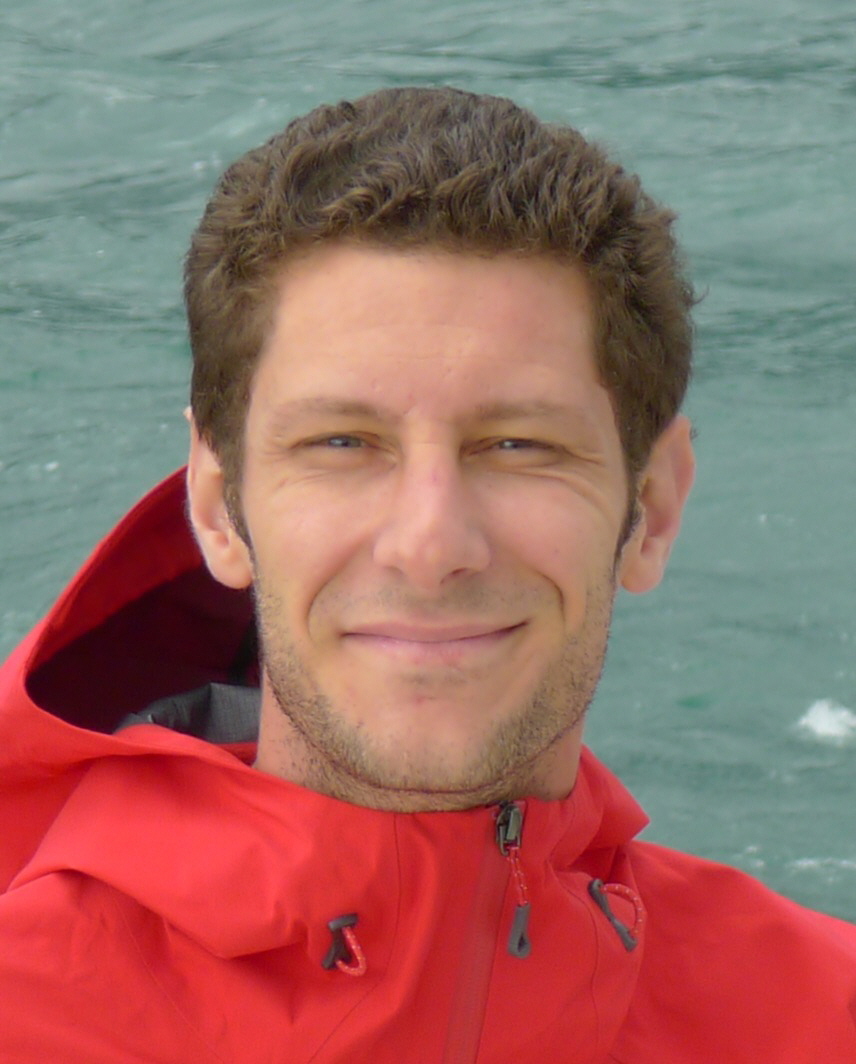 The French often refer to their film directors as auteurs because of the way they insert their own artistry into their films and exercise complete creative control. As the head of his own France-based firm Studio Brash, Bertrand Fougerat is an auteur of industrial design. What makes Bertrand's work stand out is the way he is able to transform traditional objects into something that look entirely new while improving overall functionality. His designs are quirky, colorful, and immediately strike you as products that are fun to use. These factors emerge as a clear signature style across much of his work, whether he's designing a chair or a pair of binoculars. There's also a sense of humor that often shines through in Bertrand's work, making him stand out in an industry known for its seriousness. It's no surprise that a handful of his projects are among the most popular on Coroflot, racking up hundreds of thousands of views. Bertrand's work is compelling enough that it was only a matter of time before we tracked him down to ask him questions about his background and inspiration. Once we did, he was happy to open up about what drives and excites him as a designer.

I used to draw a bunch of stuff when I was young: planes (I wanted to be an airline pilot at first), car, houses, comics. But when I drew, I always wanted to create something different, you know, bring something new. For example, I got some brand new shoes and the next day I was trying to change the design on a sheet of paper. So, I think at the age of 7, Lego constructions also stimulated my creativity. I was a very lucky boy!

Undoubtedly, my boss Alain Martel from Tak Design in MontrÃ©al, Canada. For me, he's a genius. I saw a lot of things with him; drawings, parametric stuff, discussions, stories about Canada, food...

Since 2012, I've had my own design studio and the logo has been a maple leaf, so for me, Alain a kind of design hero. 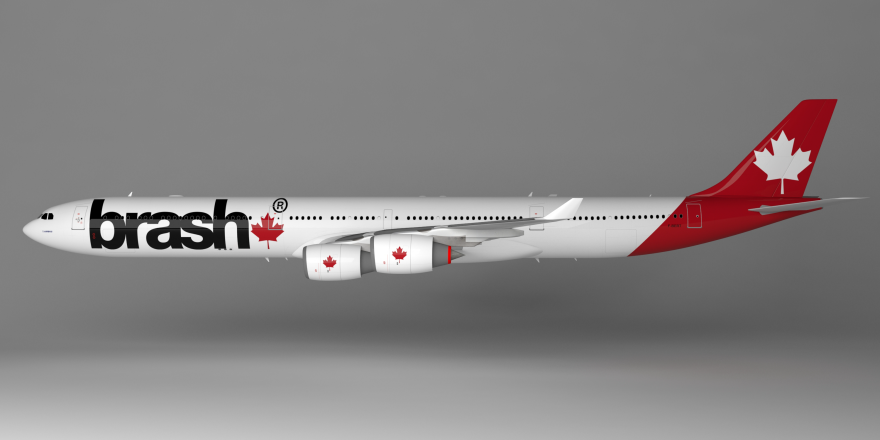 I was born in the French Alps and I had the opportunity to design some kitchen utensils. I rethought and designed a raclette device: 2 candles, an empty stomach, cheese, a couple of friends and here we are, you get the brand new raclette device! The main goal was to rethink the way you share a traditional dish during the winter (I love winter, love the low temperatures).

No wire, no electricity, you stop the heat when you want by blowing softly on it.

The product's name is Lumi. 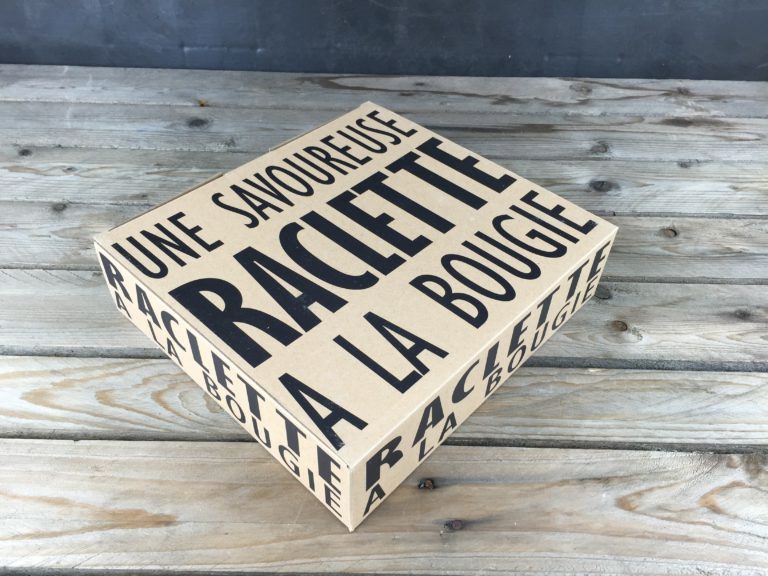 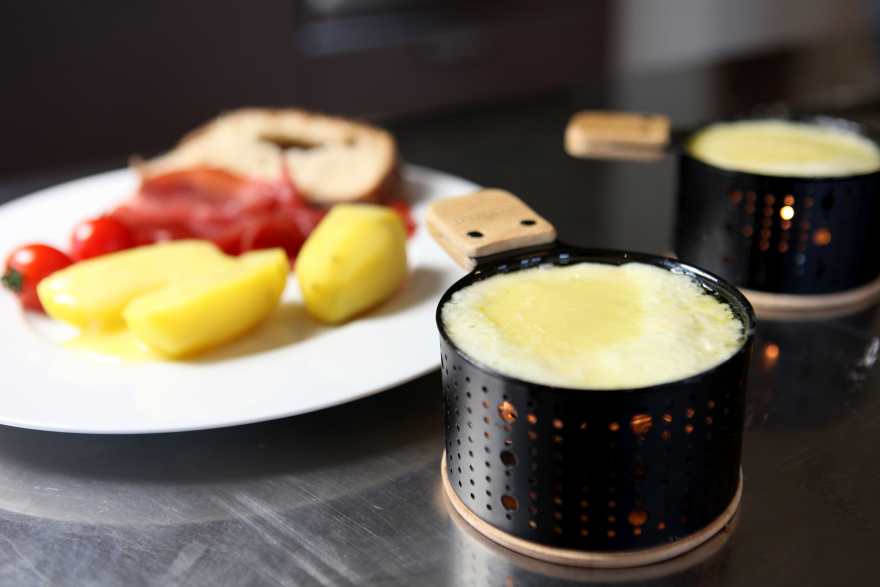 Do you have any projects coming up that you are particularly excited about?

Yes! I have a daughter (and pretty soon another one!) and unconsciously ideas for kids pop up every day! I'm currently working on projects for children's mobility. I can't tell you more.

I think that I'm like most designers; my ideas come when it's not the time for work (like when I have a diaper in the left hand and soap in the other one).

Usually, I draw three or four lines on a sheet of paper just to fix the idea and I wait. I don't draw just for fun. For me it's the best way to stall. Then I come back to see if the idea is worth it. I try to find a form that is not related with the product. I'm more creative like this, I think.

What is your favorite project that you've completed (professional or personal) and why?

My favorite one is the Nespresso portable. I love coffee and I wanted to rethink the way you drink it. I designed this product with this shape because I wanted my coffee in my car, in the street, in short: where I want, without a wire. 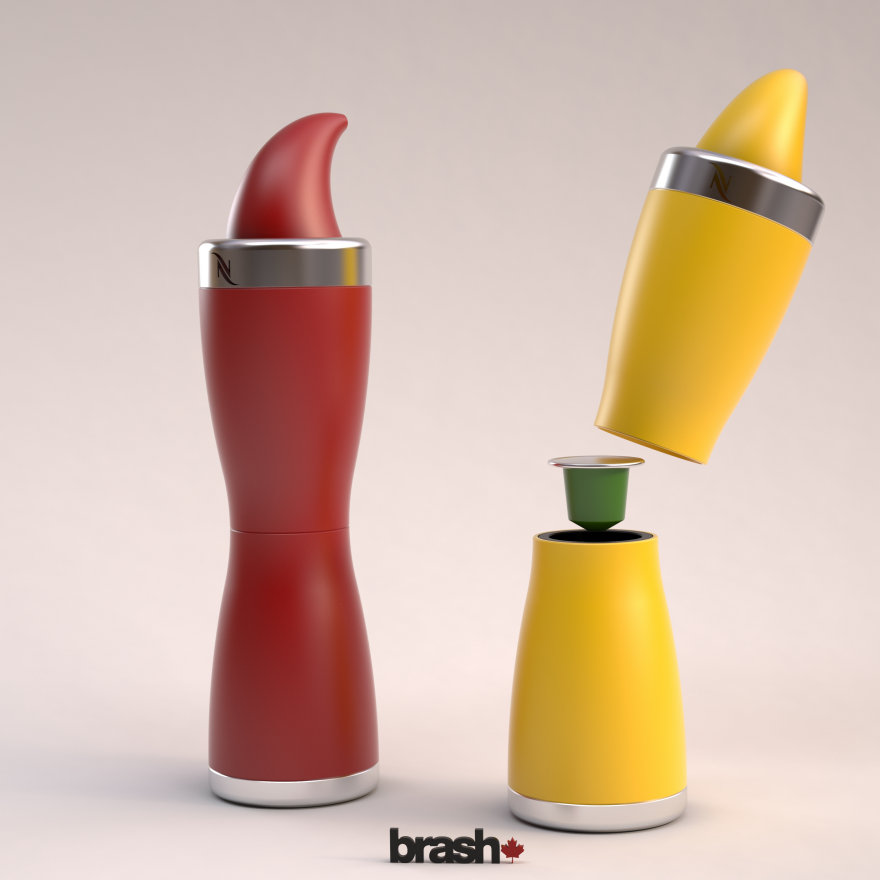 That project is one of the most viewed on Coroflot. What do you think it is about this design that has made it so popular?

This project is inexplicable for me! I get a lot of mails from Coroflot's users, people from all around the world, and every time it's the same question:

'Where can I buy this coffee maker?'

I'm very pleased when I get some questions about the Nespresso project. Maybe it's because the form is not conventional. Thanks to Coroflot, because a lot of people find this project with Google images!

You've won a handful of awards for your work. Can you talk about some of the projects that have won awards, and in particular, what about them stood out that you feel was a factor in winning?

The first one is the De Dietrich contest! I wanted to rethink the way you cook and move in the kitchen.

It's an induction cooker with a removable wire. I won a prize but for me the best recognition that I can get from people is, where can I buy this product? It proves to you that the idea works. 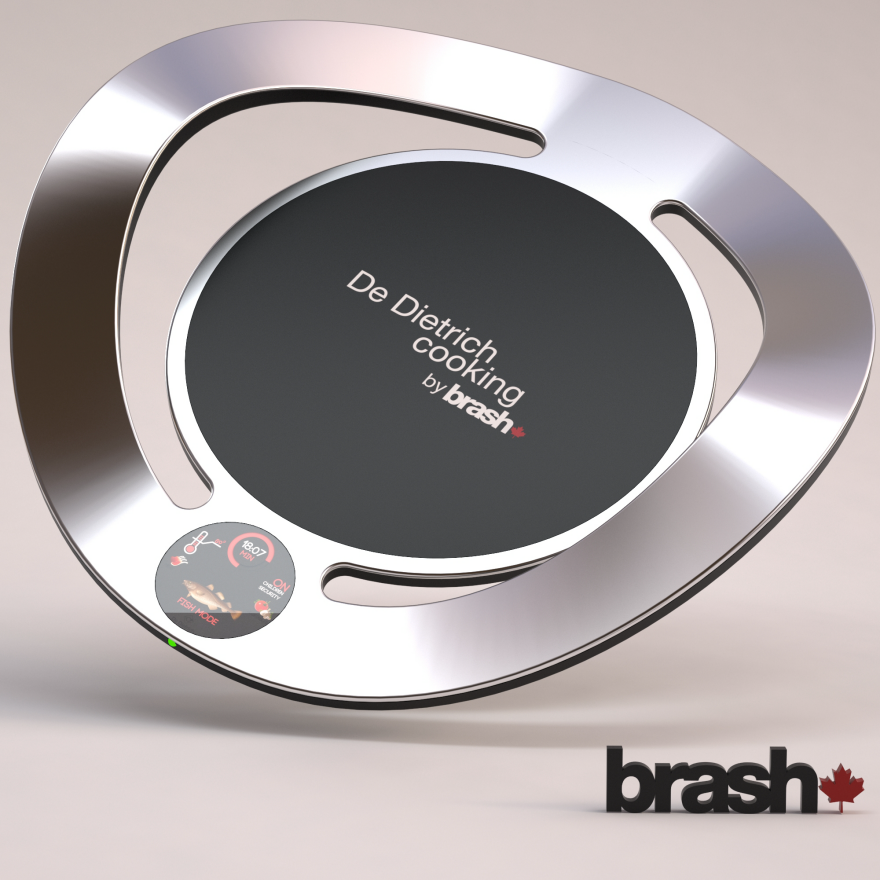 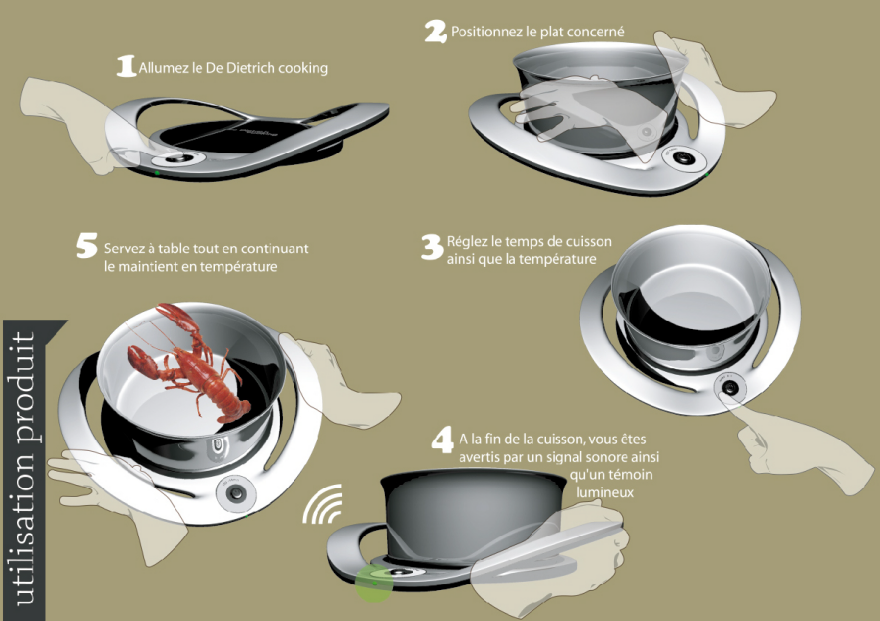 The second project was a wonderful experience in architecture with Yves Saint Laurent. I made the 3D model of the brand new headquarters in 5 weeks...using Sketchup Pro. Ouch! 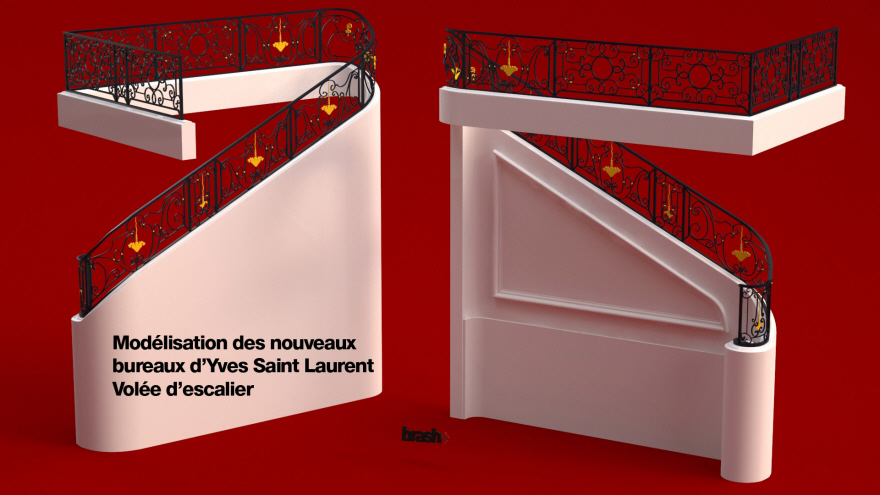 For the digital part, I work with 3 popular parametric softwares and my beloved Workstation from HP. Physical tools are my two hundred Faber-Castell and Trias from Letraset!

Do you have a ritual for getting in work/design mode (music you listen to, certain exercise, food you eat) a productivity tip?

I play bass guitar when I can, watch too much movies and snowboard (for life).

If you're stuck on a desert island and can only bring three (design) tools, what are they?

A John Neeman's axe (a jewel), the pooping lamp (a light is a kind of tool right? I laugh every time I see it) and a Leatherman Signal Knife. 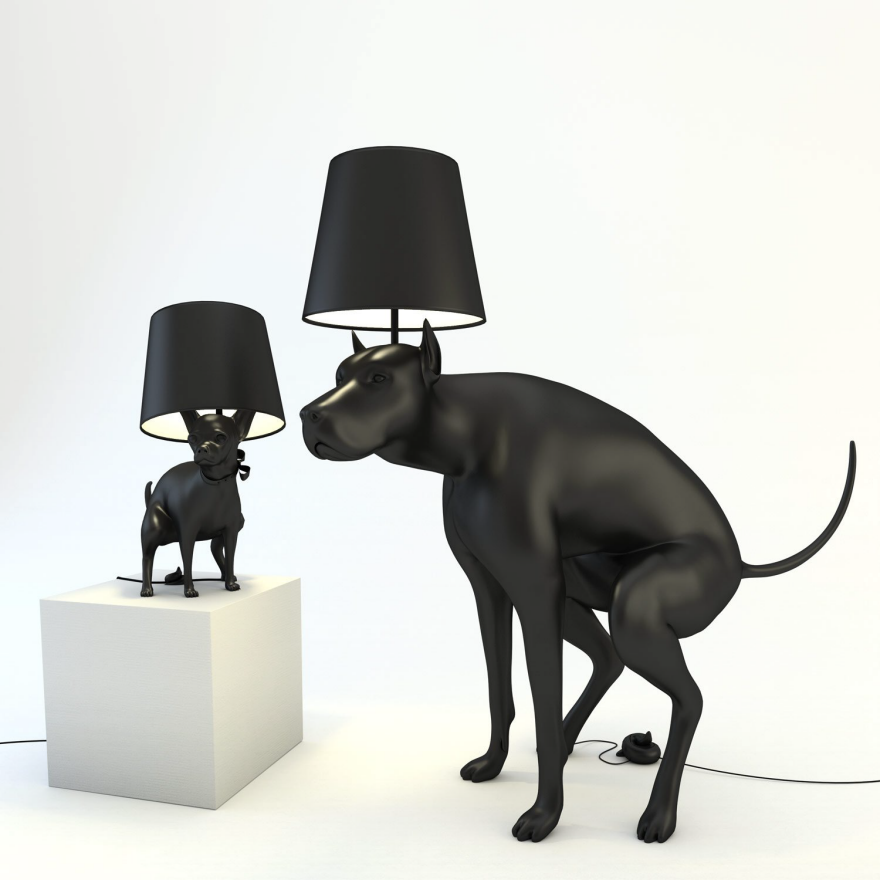 Do you have any tips for getting the most out of your Coroflot portfolio?

I update my portfolio everyday, I post links of my book in my mails, send my work to design agencies, and write articles.

Want to see more of Bertrand's work? Check out his Coroflot portfolio!