Above the Fold: Lisa Haney, Illustrator

by Neil Ferguson
Mar 22, 2017
Above the Fold Interviews 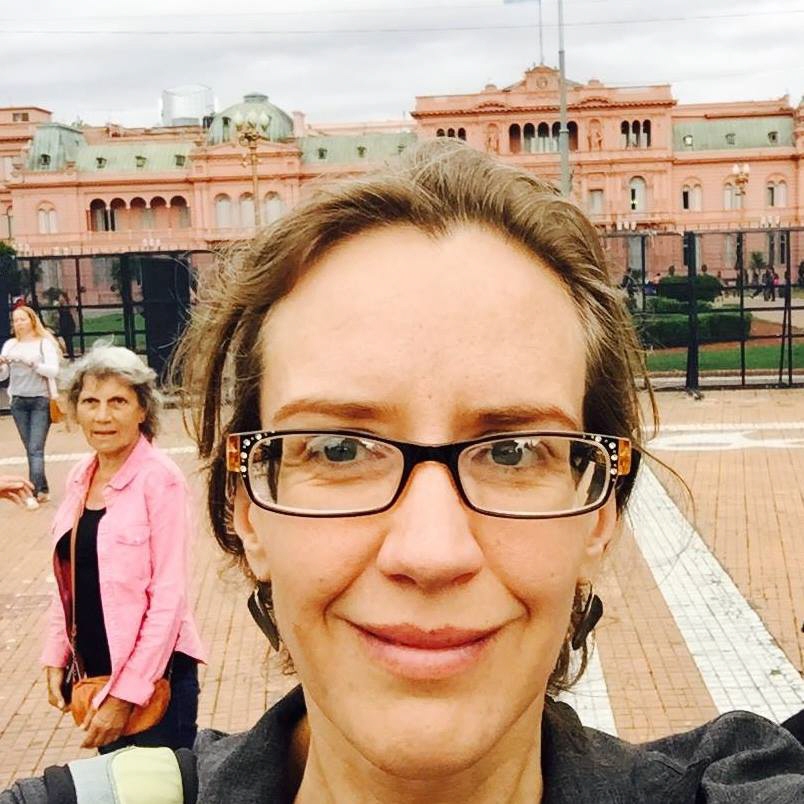 In our current political climate, the role of the press is more vital than ever as important stories break daily and the truth is regularly compromised by those in power. Also important are the images that often accompany big stories in magazines and newspapers. Images can express the sentiment of the story and convey what it is about, not to mention draw in readers. Colorado-based Illustrator Lisa Haney has spent much of her career creating editorial illustrations for magazines, newspapers, and advertisers. Her work has appeared in major outlets such as The New York Times, Washington Post, Boston Globe, and Wall Street Journal among many others. Her unique use of color complements her intricately detailed and visually impactful illustrations. Take a look at her Coroflot portfolio and you can immediately understand why her style of illustration is fitting for so many different publications. Lisa's ability to adapt to each publication she works for while still preserving a distinguishable artistic style is what captured our attention, so we decided to ask her some questions.

When I was young, I was always drawing; my father brought home piles of that 'greenbar' computer paper, and my brother and I would fill it up.

I would draw while I was watching television, or on a car trip...whenever I had time to spare. My notebooks from high school were filled with drawings in the margins. Since I also loved to read, it seemed like a natural career choice to become an illustrator. 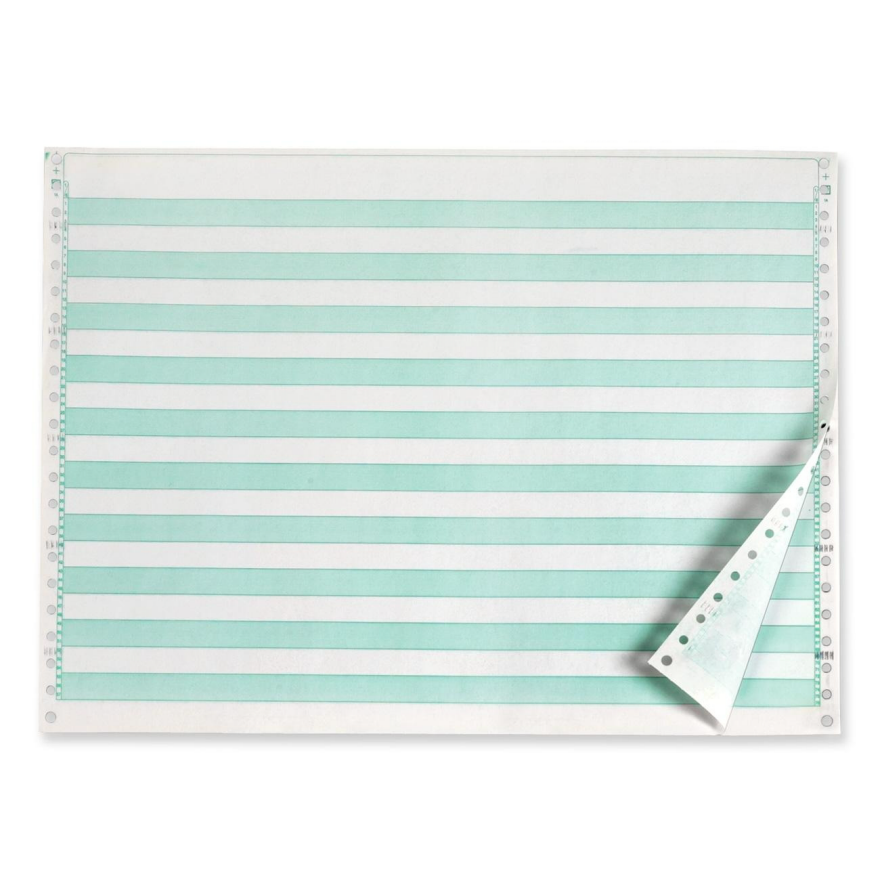 Well, if you look at my work, you can perhaps guess that I looked at MAD Magazine a lot when I was young. I loved the busy surfaces - always some new element to discover. Jack Davis, Mort Drucker, Bill Elder, that whole gang. When I later got to do some pages for the magazine, I tried to achieve that sort of feeling. 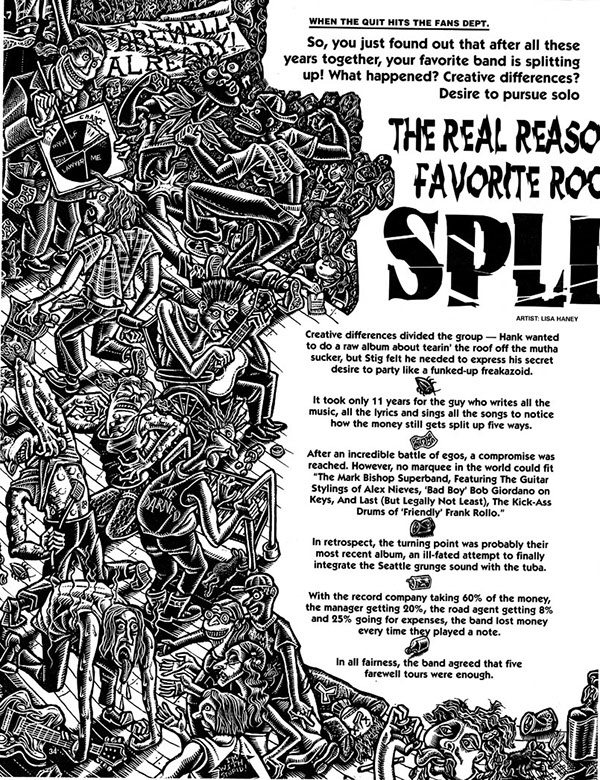 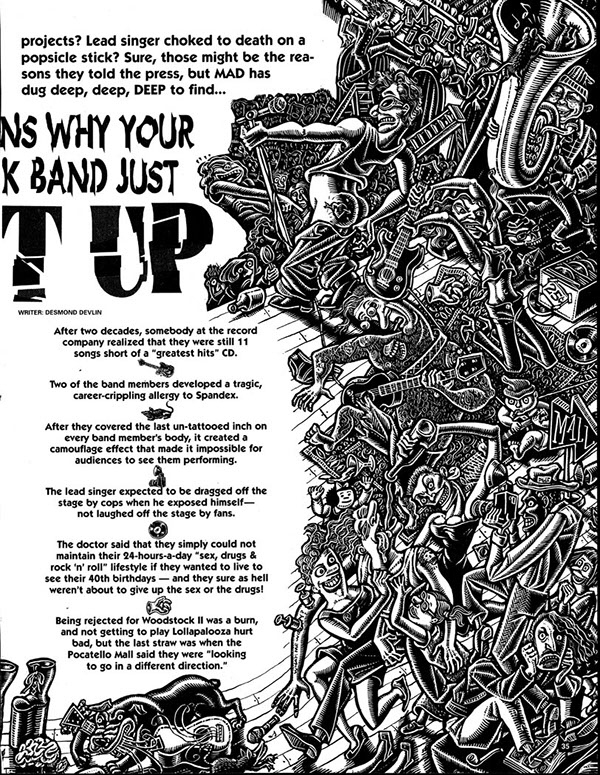 I also loved old children's book illustrations; it seems the trend now is for children's books to be as simple as possible, but when I was a kid I gravitated toward John Tenniel's drawings for Alice in Wonderland, Dr. Seuss, and anything else that was busy and complicated. We also had a book of Brad Holland's editorial illustrations for the New York Times, so I was aware of the idea of metaphorical illustration from an early age and it put the idea in my head that the pinnacle of an illustrator's career would be to do some sort of political work for a large publication.

I've always liked really graphic works; when I moved to New York after college, I was crazy for the graffiti and 'punk rock' posters. Like many New Yorkers of the time, I got a little frisson of joy whenever I saw one of Shepard Fairey's 'Andre the Giant has a Posse' stickers...propaganda in service of nothing. And I love Chris Ware's 'Jimmy Corrigan' comic book series; from a design standpoint, they're really fascinating.

Your style is unique to say the least. Did you always illustrate this way or did you come upon your style over time?

I've been doing scratchboard for many years; I think to some degree my style is defined by its complexity, and that has probably increased over time. This seems to be contrary to design trends (for now); it seems things are getting visually simplified; there are more vector-based, clean styles out there these days. Maybe this is because they look good on a small screen, or can be resized easily, or people like the streamlined look. Or, because they can be pumped out of image 'factories' for $5 per download; and designers get used to seeing simple vector designs, and they like the clean look. But it always seemed to me that the world is complex, and illustrations that portray the world can be complex, too. 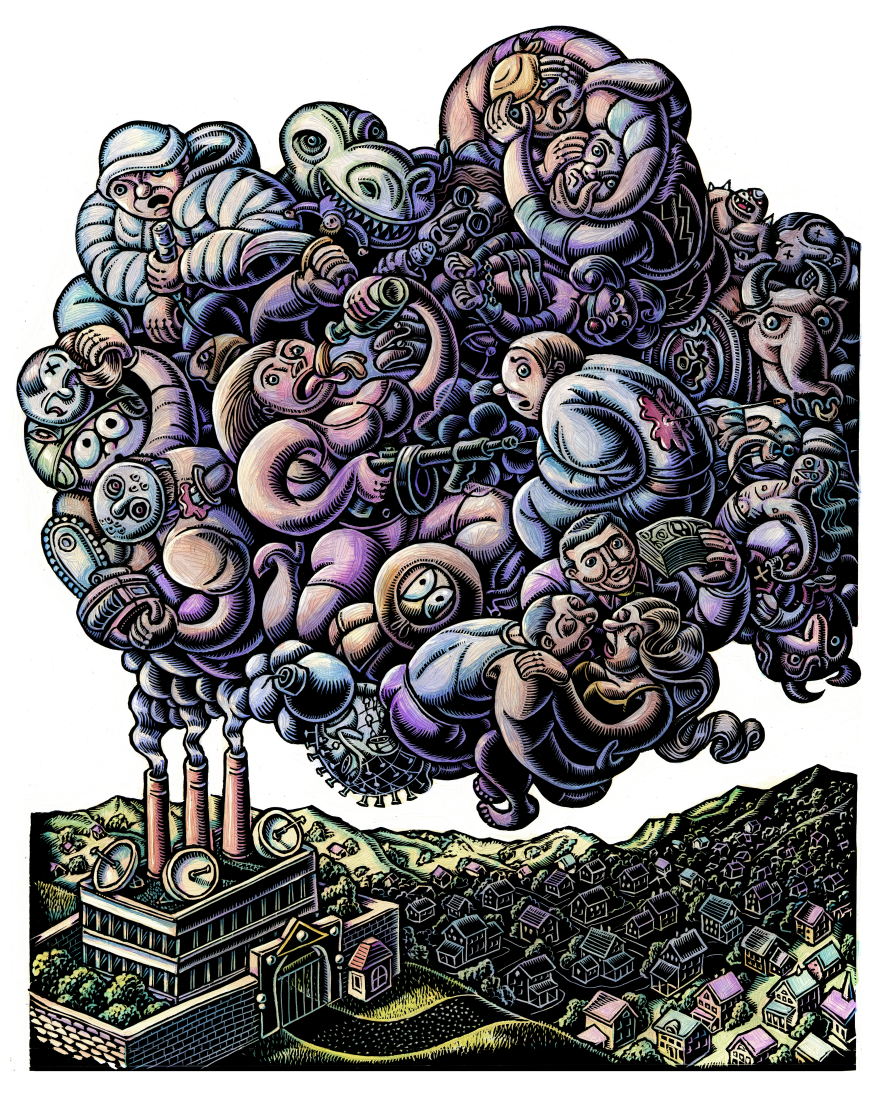 I just did a cover and an inside spread for UC Santa Cruz's alumni magazine about their organic farming program. I think I should try to find more jobs doing infographics; it's an area that's right up my alley in terms of 'a lot going on'. I drew a farm landscape that included various elements they wanted to include in their 'call-outs': the pheromone traps they developed for moths in apple trees, the program to spread information to small farmers, etc. So the landscape included a lot of characters engaged in the work they wanted to discuss...fun! I'll put it up on Coroflot after it runs.

Well, assuming it's editorial, I read the article a few times, writing down the key concepts...just words, like 'growth', 'savings', 'communication', etc. Then I go to my metaphor database (something I developed years back, it's awesome), to see what objects might represent these abstract ideas. I jot them down, and consider how they could interact with each other to represent the topic at hand. I send 6-8 ideas to the art director, they approve one, and off I go. Often there's something charming about the quick sketch that I want to retain; so I don't refine the composition as drastically as you might think; there's something instinctive in a sketch. If the metaphor is complex, the composition should be simple.

Are there any projects (professional or personal) that you are especially proud of?

I think one of my favorite jobs was this illustration for the cover of an economics textbook; I'm interested in the topic, and it gave me a chance to ponder how the system works. Since a textbook is something the reader spends a lot of time with (hopefully), I imagine students will enjoy discovering different connections in this landscape. Or perhaps, on a foggy morning, their eyes will be sufficiently blurry to see the 'invisible hand' I've hidden... 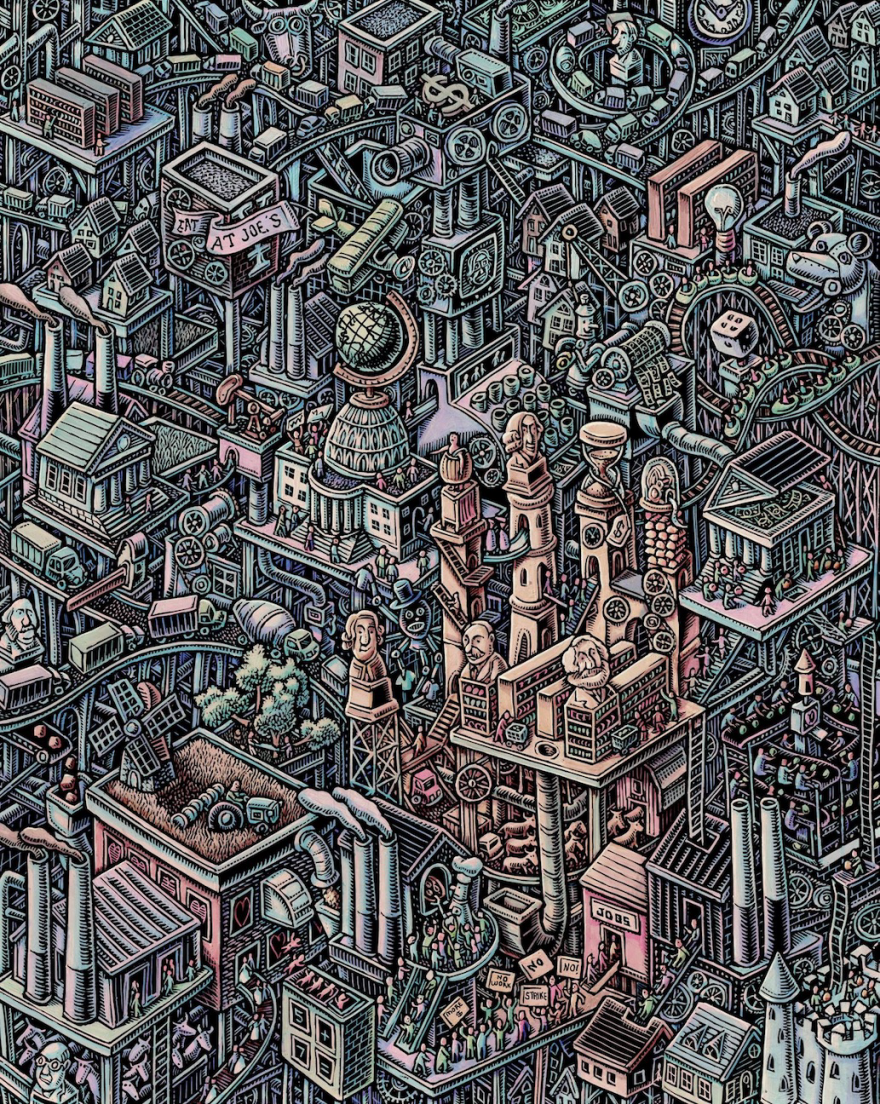 It's funny to say that I'm proud of both my work for the Baffler (a left-leaning magazine, which verges on Socialist) and the Wall Street Journal. 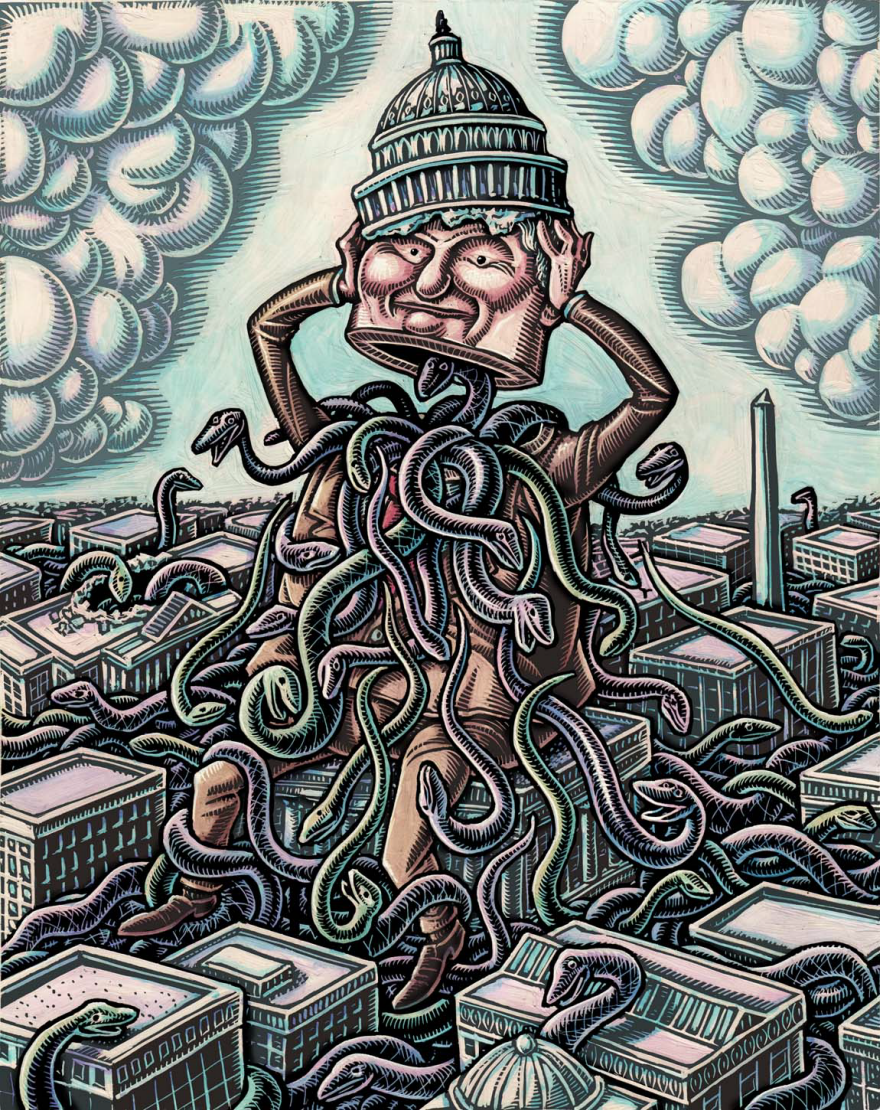 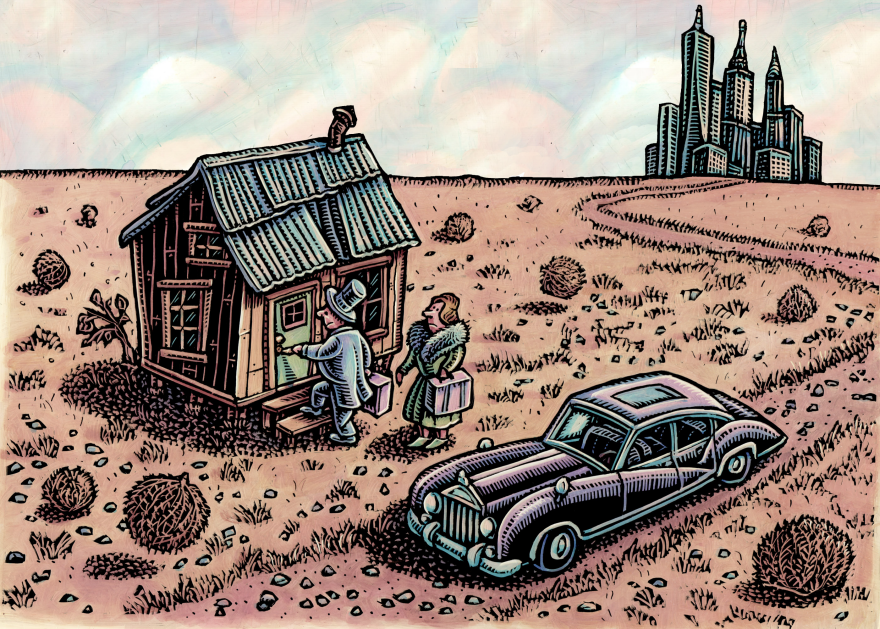 But now that I think of it, the editor of the former (Thomas Frank) ended up writing a column for the Journal in recent years...so I'm not alone in being comfortable working both sides of the aisle. In some ways, an editorial illustrator is like a lawyer: trying to express the view of the article, whether or not one agrees. There's only one time I purposely undermined the editorial writer's position with a sly metaphor, which went to print before anyone noticed what I had done. Perhaps it's no coincidence this publication didn't hire me again for this page! But the politics were so appalling to me, I don't mind terribly. There are some clients a lawyer might choose not to represent!

Tracing paper, for sketching. 4H pencils. Gum erasers, scratchboard, Dr. Ph. Martin's dyes, waterproof india ink, teeny tiny crowquill nibs, Wacom tablet, Photoshop...that's about it. Oh, and can I just say, Google's image search makes looking for reference pictures so much easier these days than when I started out. Believe it or not, they used to have a library of photographs in the downtown branch of the NYC library...you could sign out a photograph, take it home to use it for reference. We've come a long way.

Do you have a ritual for getting in work mode (music you listen to, certain exercise, food you eat) aka a productivity tip?

For a long time, if I needed to brainstorm, I would go to the gym and get on the stair climbing machine. Before going, I would write down all the objects associated metaphorically with the topic at hand (my toolkit!) Then I would climb for a half hour or more, letting my mind drift while looking at the list and imagining how I would explain the issue to someone using these items. Now I'm more likely to go for a walk and record my thoughts verbally on the phone. But I always come up with the list of associated objects first.

If I listen to music, I get distracted, since I'm a musician. Food isn't important in my process, but a little coffee always helps.

Unfortunately, yes. I've played the cello at a semiprofessional level most of my life (meaning I get paid, but I'm not ready for Carnegie Hall!); and after years spent in rock bands, these days I have a little tango trio. Eight years ago (after forming the trio), I took up dancing Argentine tango; which, as anyone who does it will tell you, is a huge time-sink. To make matters worse, four years ago I bought a bandoneon (the concertina they use in Argentine tango music), and decided to learn to play it. So now I'm in a tango orchestra in Denver... 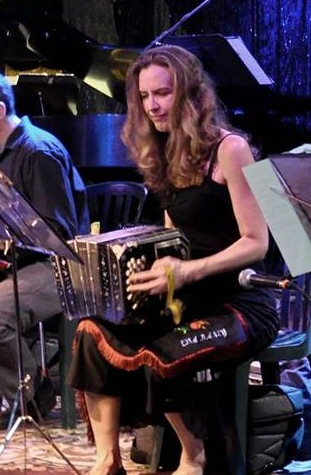 It's one of the most difficult instruments in the world; people who get good at it spend eight hours a day practicing, for years. I'm actually writing from a cafe in Buenos Aires; I came down here for a few months to take more lessons and go dancing at night. Luckily, I can work from here, just as easily as from home. The clients don't know I'm playing hooky from the United States!

Want to see more of Lisa's work? Check out her Coroflot portfolio!