For over ten years, the Coroflot Salary Survey Guide has collected and reported salary data from tens of thousands of design and creative professionals around the world. This infographic presents the most recent findings and reveals the current state of creative employment for those who are searching for jobs and those who are hiring.

Discover more than just your earning potential and add your own data to make the survey even more valuable.

Where are they working?

Creative professionals are everywhere. We received responses from over 58% of the countries on earth, with a majority coming from the United States. This map shows all the countries involved in the survey, color-coded by the number of responses, plus the 20 most represented cities. We added the aggregate 25th, median and 75th percentile salary points to each city, just in case you want to move your creative career there, or if you want to hire a creative professional in that area. 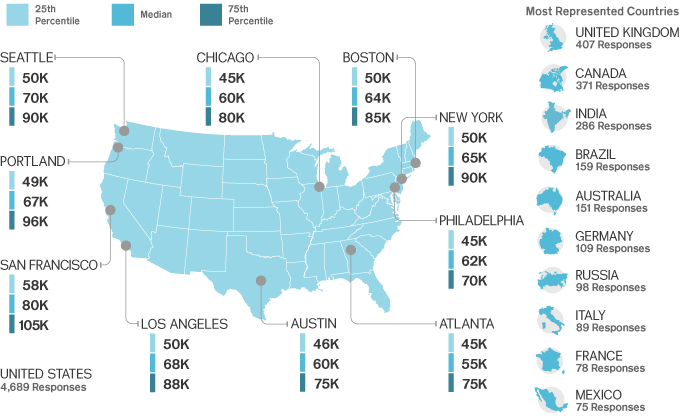 Where are they being educated?

This list shows the 20 most represented U.S. colleges and universities that our survey respondents attended. If you went to any of these schools, the salary ranges provide a gauge for your own earnings comparison, whether you are fresh out of school or a seasoned industry veteran. 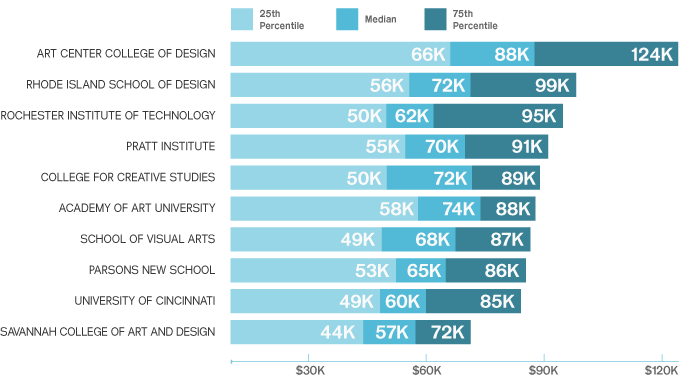 Who Needs An Advanced Degree?

Are advanced degrees worth their price tag in creative fields? Our data says yes, unless you work in Web Design. We isolated the three most represented job titles from respondents who reported High School as their highest level of education. 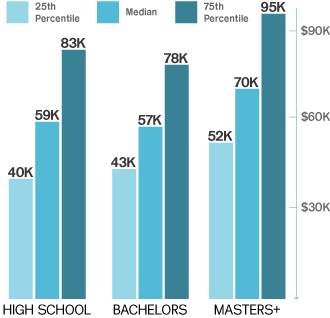 We then compared the salary ranges for those three jobs, Web Designer, Graphic Designer and Web Developer, at three points of education: High School, Bachelors, Masters or higher. The data reveals increases in salary earned for Graphic Designers and Web Developers as education level increases. Web Designers, on the other hand, may get away with avoiding student debts. This salary comparison shows a falling salary rate as education level increases among these professionals.

What are creative professionals doing?

While many creative professionals posses a broad range of skills that eclipse multiple areas of expertise, we wanted to find out what they were calling themselves. Here are the 7 most represented job titles according to percentage of total responses. When examined as an accurate sample size of the entire population, this information reveals where the greatest potential for job competition lies and which jobs may be easier or more difficult to hire for. 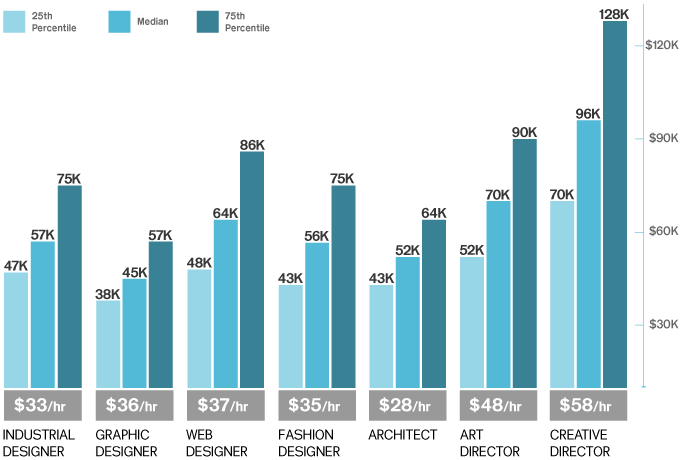 How are they getting their jobs?

We wanted to discover exactly how the creative community is landing their gigs, so we asked which of the 7 sources of employment below led to their most recent job. We left internal promotion/referral out of the options to focus on how creative professionals advance their careers outside of a single company or organization. 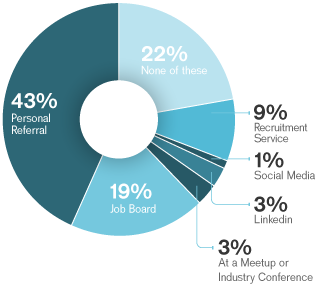 Personal referral came in as the most common source, followed by job boards. Creative professionals tend to find jobs through industry events and Meetups as often as they do through LinkedIn. According to a recent Jobvite survey, 16% of job seekers credit social media with their most recent job, which means the creative industry is not leveraging social media as much as the general job seeking population. Recruitment service came in as the third most prevalent source of employment.

It’s a common assumption that working for a small, agile and fresh boutique agency or tiny company often means you’re out of luck on the benefits front. We asked respondents what size company they work for and whether or not they receive benefits through their employer; medical and/or retirement. Our respondents revealed that benefits among smaller companies still aren’t as prevalent when compared to much larger companies. But for those working in larger companies, it’s great to see that most receive medical coverage as well as retirement benefits.