Guéret, France
Available Now
Transportation Design
Transportation Design from Miguel Mojica...
Transportation Design
View Website
AUDI A-100 is a concept design proposal for Audi, a futuristic car for the year of 2100. In the future, there won’t be any gas-powered vehicles, they are all powered by electric or renewable energy such as solar, wind, air, or even water. AUDI A-100 would be powered by electricity, featuring magnetic levitation system to eliminate friction and gain more power and speed. This system would optimize the use of its energy.
The use of nanotechnology would be possible in the future, most cars would be integrated with this tech and it might look windowless since the color and opacity can be easily adjusted

Inspired by the geometric shapes of honeycomb, Honeycomb concept car features the similar hexagonal characteristic all over its exterior body. You can clearly see this feature reflected all over the body along with the combination of black and yellow colors, it’s inspired by the interlocking bee hive. Unfortunately, there are no further details about this concept such as the engine, interior, or material used. 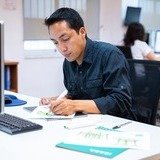