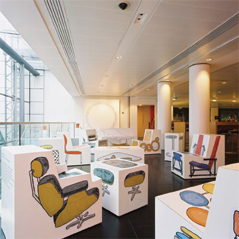 MISCELLANEOUS DESIGN FURNITURE - This furniture series was created initially as a response to a Brief produced by a financial media company for the rest area of their Finsbury Square Headquarters. This business is a highly secure environment that maintains strict controls on its public image by sponsorship of specific creative projects which have the clear purpose of demonstrating their immense financial power and good taste to the rest of the world.

The proposal required seating designer for the lavish canteen area, which even includes an atrium wall designed by Foster Associates.

Paradoxically in this case though, the funding was a restraint, and consequently it was decided to present the company with exactly what the budget implied they wanted; budget designer furniture.

The concept was to present them with a poor man's Eames' chair, furniture that appears to be bad copies of famous designs, made by an unskilled handyman. To this end, basic cubic shapes were used to form the chairs themselves, whilst the imagery on each face is rough trompe l'oeil hand sketches of designer chairs, similar to those that already litter the building. In fact the quality of the drawings is so poor that the pretension of an attempted illusion becomes amusing. The one difficulty with this approach is that of becoming desirable and trendy itself.

When shown in Milan this concept was taken a step further when the reduced versions were produced as flyers. These smaller-scale products are made from card, a cheap material, and enlarged the focus of the concept from just the original designer chairs to the designer chair miniatures, in the style of Vitra.

CATHARTIC DESIGN - LEVER-OFF
This provides satisfaction with the dramatic movement of a large switch to restart the connected computer. It replaces the fiddly alternative that is provided as standard for a restart

CRUSH CAN
When emptied this can be compressed to present a completed image that is intended to surprise and amuse, providing some light relief from a frustrating situation

SUFFOCUSHION
The Suffocushion was created as an apparently unassuming object into which an irritating phone can be sealed and muted. The only indication of its suffering is the small, flashing light under the material 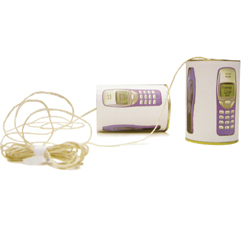 GIFT FOR £1 - This idea is based on the theory of reciprocity, only giving in order to receive, in this case a present that is useless to a single person. The tins were covered in images of an iconic Nokia, one of the first mobile phones to be commonly given as a present to younger children. The excessive length of the string deliberately makes it difficult to keep the string taut, rendering it nearly unusable. This replicates the disappointment commonly experienced with gifts. 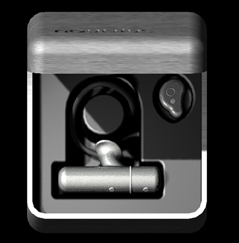 NAUTILUS HEARING AID - Targeted at gadget-conscious professionals with larger disposable incomes, it contains a mobile Bluetooth link, activated by the rear button. This button also rotates to alter volume, the tactile location for which is assisted by the raised circular sections on either side. The other button on the side activates a Telecoil system, and is inline with the ear to prevent movement of the hearing aid when it is pressed. Also included is a matching In-The-Ear unit to making a pair for complete stereo sound and a presentation case that acts as the recharging unit.

BRANDENIGRATION - RADIO STATION REBRANDING
These spaces were created as an alternative to a stereotypical corporate environment that soon turns the brand stale for the employees it surrounds. They represent a consciously excessive version of an office interior in order to provide interest for those who use it.

They used a methodology in which the station's listener is the good twin following a specific lifestyle and the employee is the bad twin who may not believe in the lifestyle they must portray. Anti-consumers opinions were used for a bad view of the stations to create a humorous, stereotypical environment.

VIRGIN RADIO
The Virgin Radio design used the concept Virgin as Slut and the design language of temptation for the whole environment, which included opaque curtains around cubicles that are short enough to tempt passers-by to peek underneath. Also in place of a conference table was an oversize bed with a central table playing on the phrase pillow talk.

CLASSIC FM
The Classic FM concept followed the opinion that the station was only a popular interpretation of classical taste. Therefore the environment employed an apparently classical decor that on closer inspection is merely flat images stuck around the interior. The furniture was equally visually awkward with digital grandfather clocks and chandelier images stuck around a single naked bulb.
Portfolio
Comment