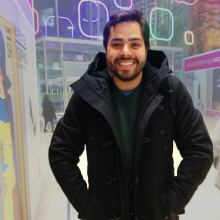 Industrial Designer graduated from the Universidad de los Andes (Mérida, Venezuela). Is currently doing Master studies in Design & Engineering at Politecnico Di Milano (Milano - Italy). During 2012 and 2013 he worked as Project Manager and was Co -Founder of design studio 3másuno, as well as Manager of Design and Development at DACO CA where he design products for the agricultural field , development of communication strategies and improving brand image , personnel supervision and production processes. In 2011, he worked in CD&I ASSOCIATES, as JUNIOR INNOVATION CONSULTANT such as COORDINATOR AREA - TOTAL DESIGN, managed group of creative work by assigning tasks and responsibilities, he designed, developed and worked with the production of products for: home, office, and medical equipment, among others. He has worked with clients such as: CORFERIAS, PHOENIX EM and MOVIBAR. In 2009 he co -founded the design studio GALLINA CIEGA in Merida, Venezuela, with this studio they obtained publications in leading journals of the country, was in the team until 2010. In 2011, with the team of CD&I ASSOCIATES has participated in the winning projects of major international awards such as: The Buendía library (First Prize Winners by public vote and a special mention awarded by the University of Palermo in Buenos Aires, Argentina) and WISHBONE (Finalist in design Award delivered by Sindmóveis Salao design Bento Goncalves, Brazil) in 2009, he won the Eureka award for innovation in toys and crafts with the Currican project. In 2008 won a special recognition award at the Eureka Universia to university innovativeness, mention recreation, art and design. With the Currican project, both prizes awarded in Caracas, Venezuela.

1st place by vote of the public and a special mention at the Latin library Award in Argentina. Project library Buendía. Finalist in the design competition SALAO DESIGN in Brazil. Project WISHBONE 1st place of the Eureka Prize on Innovation with Toys and Craftworks. Project: Curricán.