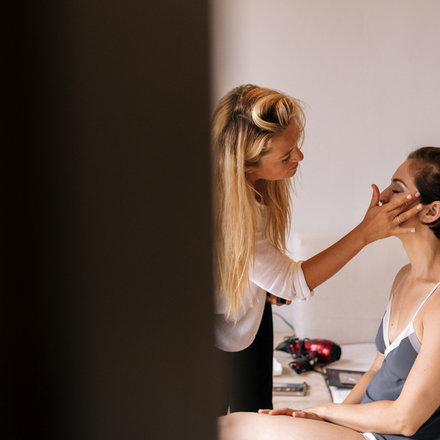 Having spent the last 8-years living in beautiful Santorini, Greece Morgan Belleville is an internationally exposed, freelance hair and makeup artist. The Cycladic island being a top destination for people all over the world and a melting pot of diverse cultures, has had her styling hair and makeup for various situations including; backstage at london fashion week, elite clientele in private locations, on some of the world's largest yachts and for fashion photo shoots including Australia's SaboSkirt.com. Morgan has designed customized hairstyles for over 500-wedding ceremonies and personalized hair and makeup for over 150 island photo shoots, as well as specializing in Asian makeup trends and cosmetics. She also maintains her local following on the island, as well as in Santa Cruz, focusing on color corrections and styling. A wide range of unique experiences has allowed her to transform her client's hair in any way imaginable and her signature look is color that appears natural and is low maintenance, favoring sun kissed pops and soft transitions. Morgan is a native to the Los Gatos and Santa Cruz area, and began pursuing hair styling in high school, shortly after obtaining her Cosmetology License she became an apprentice working with Aveda Artist, Walter Claudio in Santa Barbara. Under his driving force of creative and artistic expression she received advanced training on his patented HeadMapping® system, and opportunity to design original colour formulation for photo shoots, and styling for high profile clientele. Morgan is also an expert in the art of the perfect blowout, having spent time in Union Square, San Francisco working at drybar, and given personal training by founder Alli Webb. Most recently she spent time working backstage during London Fashion Week, again with AVEDA and Jon Reyman for designers including Nicopanda and Teatum Jones among others. After participating in a 12 week, intensive course on runway styling with Salonprorx.