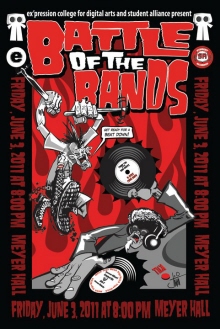 A collection of works ranging from retro toon, to Advertisments for events and logo design.