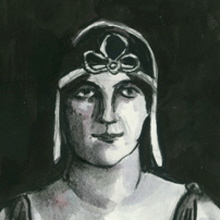 Ana Bellido was born into a family of painters in Madrid, Spain. After she finished studying piano and wasn’t allowed to have a crocodile farm she went into Plastic Arts. Before obtaining her Bachelor degree in Fine Arts, in the Universidad Complutense de Madrid, she made an internship in the HAWK Fachhochschule Grafik-Design. Hildesheim, Germany that encouraged her to focus her creativity in illustration. Decision that, after a period of hard work, developed into several prizes. Since then she shares her time between surviving as a freelance illustrator and working for-with-and-in the cinema world, where she has done storyboards, movie posters and production design. She lives and works both Berlin and Mexico city.