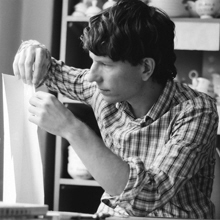 Bartek Mejor graduated from the Royal College of Art in London (UK) in 2011 with a Masters degree in ceramics & glass, and completed a Bachelor degree in ceramic design at Bath School of Art & Design (UK). Since 2008, he has been collaborating with a leading porcelain and lead-crystal glass brand, Vista Alegre Portugal, for which he designed several collections of tableware and decorative objects. Bartek also worked as a design consultant for porcelain manufacturers such as Wedgwood and Royal Doulton. His collections are regularly presented at design fairs worldwide, and individual projects are exhibited in curated shows and awarded in contests, such as DMY Berlin 2013 fair (nominated for DMY Design Award) and International Trade Fair 2008 in Munich (Talente Design Award for best young designer). In his work as a designer and maker, Bartek makes the most of the potential offered by modern technologies, and merges them with traditional craft techniques.