An Interview with Briar Levit, Director of Graphic Means

To a younger generation of designers who are growing up without ever doing anything by hand, why do you think it's important to know about the history covered in your film?

While I don't think a designer technically has to know design history to be talented, I do think knowing it will help them to be a more deliberate and sensitive designer. Understanding what went before you, and the context for itâ€”social, creative, technicalâ€”it allows a designer to make choices about type, composition, and image with a sense of what certain styles can evoke with their existing associations. A classic example that has been used over the years has been blackletter type. There was a time, and perhaps that time has passed, where using that style of type could immediately give a piece an association with Nazi propaganda. So when a designer chooses to use type like that, it's important they know the history of it, and can be sure that it is emoting the feelings they want to emote.

Alsoâ€”knowing the production methods and technology of design through the ages is, at a base level, really enriching. It is exciting to understand how work came together in a time when thousands of fonts and images weren't at the fingertips of designers everywhere. When I think about the work made by people like El Lissitzky or April Greiman, I'm doubly in awe of them, because they were taking new technologies, and pushing the limits, trailblazing new ways of visual communication. When I teach design history, I love focusing for a bit on the Olympics work of Lance Wyman due not just to the formal beauty of it, but the sheer complexity of the production techniques required in order to create those emanating letterforms. That was painstaking workâ€”there was not click of a setting and then a button to make that 68. It really sinks in for students with that example.

You also teach graphic design. What kind of interest do you see these days from students in learning the old styles of doing things, or at least being aware of them?

Students vary, but it's not uncommon at all for students to discover the excitement one can feel of making work by handâ€”whether it's lettering, illustration, or using older print methods like letterpress. There is a digital fatigue that exists, even with new designers, and producing elements of a design by hand really helps many feel more connected to the work they are making.

You started collecting manuals. Are there things we can learn from those even as technology keeps pushing us further away?

Because phototypesetting isn't possible at this point (at least, I haven't seen a working photosetter), examples of non-digital technology tend to relate to older methods of printing.

At Portland State University, we have a Risograph machine (stencil printer, that looks more like a photocopier), that students are excited to experiment with. There is an element of ambiguity about what you will get when you print your workâ€”so that is exciting. But there is also a level of intimacy with the output. You can only print one color at a time with our Riso, so students have to set up their files accordingly. This helps them understand printing at its most basic, and allows them a little freedom to experiment with color interactions in a way that is illuminating as opposed to the superficiality of the screen. And then, when they need to mimic something like overprinting in a digital design, they will finally have an understanding of what they are actually mimicking, and do so more deliberately. The same goes for letterpress printing. I see students become more sensitive to type, and appreciate its subtleties more, once they have set and printed type by hand. 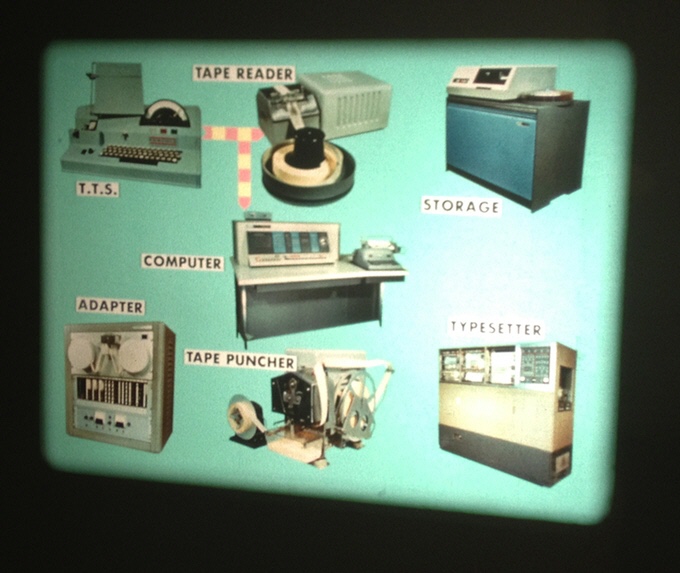 Different graphic design tools used in the past

Is there one particular tool or technique that you find especially fascinating that is not used today?

Phototypesetting in general is mind blowing to me. We went from what was a fairly simple way to get type on the pageâ€”relief metal typeâ€”and then added all these steps in order to be able to photograph type and get it onto an offset printing plate. What makes phototypesetting endlessly fascinating, is that there were so many different machines that did the job due to patents. So type came on film cards, strips, discs, you name it! Looking at all these font formats, and the hardware that ran them never gets old. If I had to choose a favorite, it's probably the Phototypositor, which allowed for the tight letterspacing as well as wild manipulations of display type.

You interview a handful of big names in the design world in the film. What was the reaction from people in that world when you explained the premise of the film and approached them for interviews?

The reaction to the project was really warm overall. Many folks wanted to help me in any way they could, and did so by provided images, archival materials, and one even demonstrated the process of creating a paste-up mechanical for the film! There was only one person who wasn't interested in exploring these methods as they thought it was too nostalgic. And while nostalgia certainly plays a role in the film, the narrative serves a greater purpose in explaining methods that were done for such a short time, that they are disappearing from the collective memory of designers. It also sheds light on how design approaches evolved due to developing technologies, as well as social aspects of the design and production world of the past decades.

Yes! The general public seems to have a better appreciation for design than ever before. A big part of that is likely due to the fact that the average person has access to design tools that people of the past didn't. From the desktop computer, which allowed people to make their own cards, banners, flyers and posters, in the early computer days, to the print-on-demand services available now that allow the general public the capability to get a hard cover book, textile, or product of your choice printed. Perhaps the strongest connection the public has to design now is social media, and the way it gives people control over the way they present themselves to the world. It's not hard to see why these topics have gained popularity, and why there are more and more design students every year.

This may be a silly question, but do you think the success of Mad Men explains some of the interest in the old ways of doing things?

Well, I can speak for myselfâ€”I'm a big fan of the show. My own interest in history is connected to my ability imagine myself living within completely different circumstances of past eras and societies. Mad Men does this expertly on so many levels. Whether its social positions in society (race, sex, class, religion), or whether it's imagining writing up a multiple page report on an IBM Selectric typewriterâ€”one usually feels awe in the way things were done in the 1960s after watching Mad Men. I will add that I always felt a sense of relief that I was born in the late 70s after watching the show too. It's never lost on me that a woman of the "Mad Men Era" wouldn't have had the opportunities to do what I've done (or least not as easily).

You've said that you have a bit of an obsession with finding old manuals in thrift stores. What's the coolest thing you have discovered over the years?

That's a tough one. I would probably say the book Complete Guide to Paste-Up by Walter Graham, because it was one of the first I found, and I eventually ended up interviewing him for the film.

I also love finding old copies of the Pocket Pal. The covers of that little reference book alone, are a crash course in the evolution of graphic design. 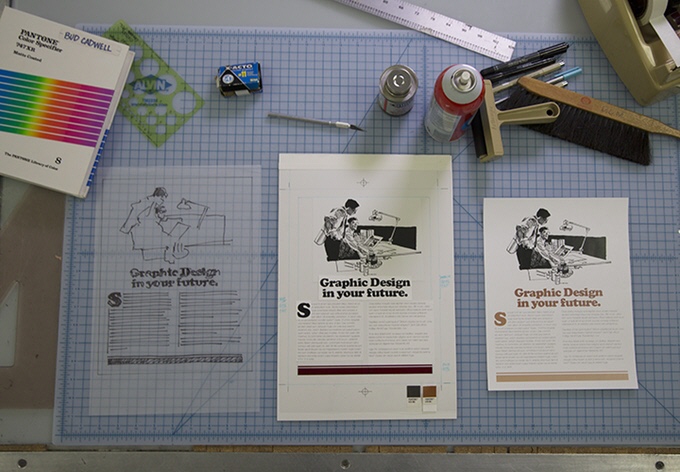 A demonstration of paste-up

Have you encountered any designers who use these old methods for stylistic purposes?

Well, phototypesetting methods are just not available, so I don't expect we'll see that returning anytime soon. What I see is primarily illustrators and letterers who continue to use hand methods. There are a select group of designers who like to experiment with dry transfer type (Letraset, etc.). Of course letterpress printing is more popular than ever as evidenced in the plethora of paper goods for sale at book and gift shops. On the smaller scale, many people prefer to make zines without a computer. There seems to be a sense of authenticity when the original production methods for these little indie publications are used.

Where will people be able to see the film in the coming year?

The film is touring worldwide through the Summer (check graphicmeans.com/screenings for details) and will be available to purchase (streaming or DVD) in Fall.