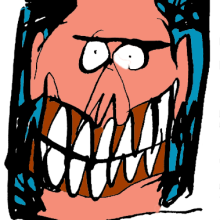 Throughout my career as a Creative Director and designer in the broadcast industry I've worked as a cartoonist and illustrator, mostly doing topical cartoons for publications such as Private Eye, The Spectator, The Oldie, Punch etc. I've also done regular weekly strips for the broadcast and media trade press, as well as having a short stint writing for Spitting Image. At present I'm trying to get some scripts for satirical short films off the ground and I'm taking an 6 month online course on 'How to Draw Noses'. twitter: @marshallcartoon